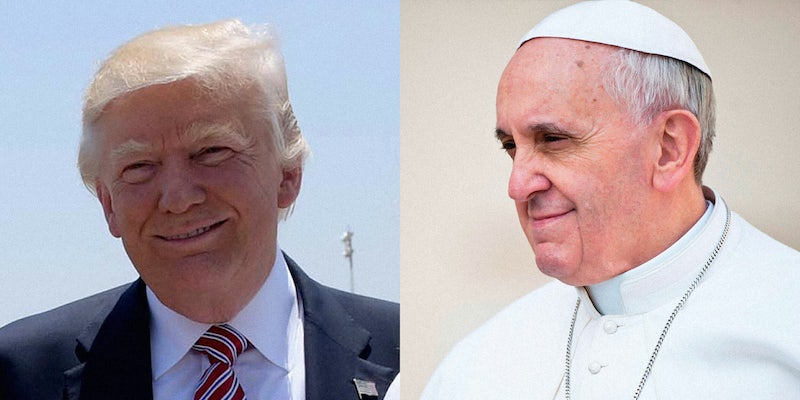 The pope, according to reports, warmed up to Trump.

By all accounts, it went relatively well. Trump told the pope he would “never forget” the meeting he had.

But Pope Francis perhaps got the last laugh. Or laughs, to be precise.

Not only did the pope give Trump a book on the importance of protecting the environment and climate change, he even supposedly got in a fat joke at Donald’s expense, asking First Lady Melania if she kept him plump by feeding him a treat from Slovenia.

And then there’s the photo op. If you recall, Trump released a ridiculously harsh statement after Pope Francis called his plan for a border wall un-Christian.

Something about the Vatican being blown to bits.

Which is maybe why, in one of the first photos, the pope… wasn’t pleased to be with Trump.

What an unbelievable photo pic.twitter.com/fGIaNZZQvY

Just about everyone online had a LOL at that. Because, come on, that photo is a LOL.

This is the future that liberals want. pic.twitter.com/0R98NJsw1I

Being next to @realDonaldTrump causes resting Pope face. pic.twitter.com/S1EYGGuFoQ

Pope Francis is absolutely not here for this bullshit. pic.twitter.com/m19xyHbzDl

"Is the pope Catholic?"

*Trump whispers to an aide asking if the pope is Catholic* pic.twitter.com/hzbviznjD1

So a Jew, a mail order bride, the devil and the Pope enter a bar…

The Pope looks like a hostage here. The only thing that is missing is today's newspaper in his hands. #TrumpInvatican pic.twitter.com/XlH6es44El

But, alas, it appears the pope did smile for the cameras.

In some photos the Pope smiled (see prior tweet). In others, he did not, as pool report indicated (Pool Photo/AP) pic.twitter.com/rlT0lP9HUl