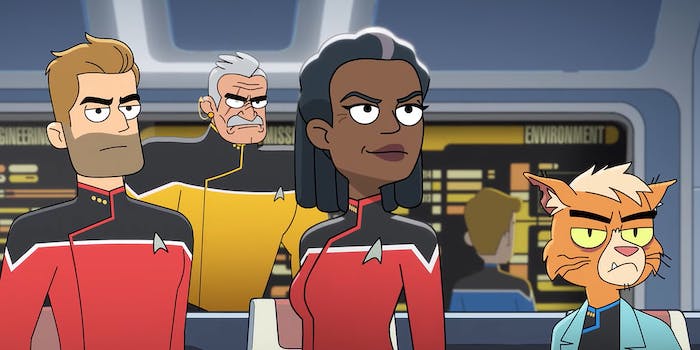 It debuted a new look from the new show 'Lower Decks.'

The Star Trek Universe kicked off San Diego Comic-Con at Home with a look back at two flagship series and a preview of what’s to come.

Moderated by Deadline senior editor Dominic Patten, the Star Trek Universe panel didn’t go smoothly. The panel was temporarily removed from YouTube due to a copyright complaint from CBS, a similar issue happened during Cartoon Network’s panel. But once the copyright issues were resolved, fans were treated to the cast of three Star Trek TV shows—Discovery, Picard, and the upcoming animated series Lower Decks—as they offered teases for what was to come—especially from the recently announced Strange New World, which would star Anson Mount, Rebecca Romijn, and Ethan Peck.

“The [writers’] room has started,” executive producer Alex Kurtzman, who noted that active discussions around Strange New World were taking place around last year’s SDCC. “There are 10 stories broken, which is very exciting, and they’re just sort of the beginning, but it was one of those shows that I think everyone came in with such enthusiasm and so much love.”

Lower Decks, which is set to premiere on CBS All Access on Aug. 6, was the only series to debut any new footage, which comes from the first episode. Following members of the Starfleet crew who we don’t often get to see on a Star Trek show, the scene involves U.S.S. Cerritos crew members Ensign Brad Boimler (Jack Quaid) and Ensign Beckett Mariner (Tawny Newsome). According to Lower Decks creator Mike McMahan (Rick and Morty, Solar Opposites), the show takes place in the year 2380, placing it after Star Trek: Nemesis but well before Picard in the Star Trek timeline.

“We tried to fit it into canon so it doesn’t break anything, but we tried to do something new with it at the same time,” McMahan explained. “We tried to keep it exciting, but we also tried to keep all the ethical sci-fi stuff that makes Star Trek Star Trek without breaking it. And I think we’ve come up with something that a lot of people are going to enjoy.”

The Discovery panel involved part of a virtual table read of the show’s season 2 finale—the entire table read will be available to watch on July 24—while both Discovery and Picard featured Q&As with the show’s cast and crew.

But amid the teases and behind-the-scenes glimpses, several participants stressed the importance of the messages Star Trek has always relayed, especially in the wake of recent events.

“I think what’s great when you’re working on genre is you often get to say things about current events and mask them so they don’t feel like medicine or that you’re being taught something,” executive producer Heather Kadin said. “And I think in the case of Star Trek, thematically, it’s just baked into what Star Trek is about a better hope, about equality, gender equality, racial equality, sexual equality. I mean, it’s what it is.”

You can watch the Star Trek Universe virtual panel in its entirety below.