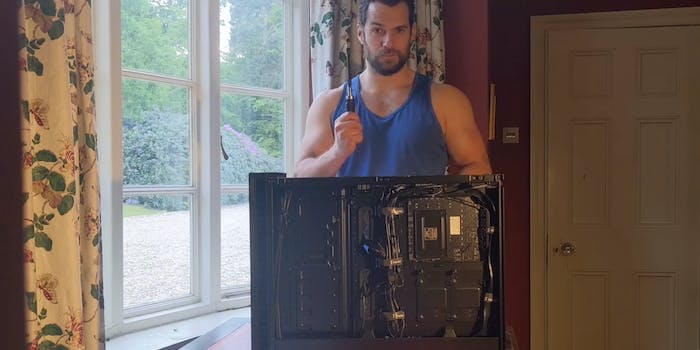 His documentation of the process takes you on a journey.

Henry Cavill, fresh off the success of The Witcher, has been rather productive throughout the past four months (and counting) of quarantine. He’s painting Warhammer 40,000 miniature figures, he’s honing in on his cooking and baking skills, dabbling in some storytelling, and now he’s built himself a gaming PC.

On paper, while building a computer from the ground up sounds fascinating, it doesn’t really scream “must-watch entertainment.” However, if you mix Cavill, some weather-appropriate tank tops, lightly self-deprecating commentary, and set the entire thing to Barry White, that all can change very quickly. And Cavill seems to be more than aware of how it might be perceived.

He shared his foray into gaming PC building in an IGTV video that captured the highlights of his build. He made comments about how delicate he had to be about putting certain pieces together, documented mistakes and troubleshooting attempts, and even noted that he took a break from building his own gaming PC because, well, he had some gaming to do.

“This kind of material isn’t for everyone …. viewer discretion is advised,” Cavill wrote. “You may see a lot of parts that you haven’t seen before.”

By the end, Cavill delivers a win-win. He has a brand new and impressive gaming PC to play on, and we were able to get plenty of entertainment value out of it.