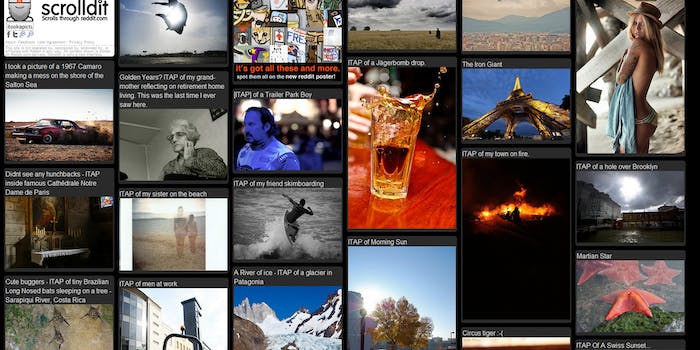 If you're tired of staring at a lot of red and blue links, you'll love this new app.

Say goodbye to line after line of pastel-blue links. Reddit just got a whole lot prettier.

Scrolldit, a third-party web app released yesterday, turns the social news site into an image gallery, of sorts—a flip-board-esque conglomeration of posts laid out against a simple black background.

The site’s creator is Jonathan Bouman, 24, a fifth year medical student from Amsterdam who’s been building websites since he was 11. He threw Scrolldit together over just two nights last weekend.

“I created it because I thought the Reddit interface could be improved,” Bouman told told the Daily Dot by email. “On the original site there’s pretty much whitespace. Furthermore I wanted a version of reddit that’s easy to browse on my mobile phone.”

In that sense, he’s succeed: Scrolldit is a much more visually-rewarding way to browse Reddit. The site’s been in need of a visual overhaul for a while now. But big changes always risk alienating the user-base and inspiring a mass exodus (hey there, Digg v4).

Scrolldit hardly replaces the social news site. It just visualizes things differently. Image and photography subreddits look gorgeous; text and link-based subreddits look ordinary.  Regardless, to comment or submit a link or do anything, really, you’ve still got to go through reddit.com (Bouman said he has no plans to post ads on Scrolldit).

Scrolldit looks great on mobile phones and tablets. And, true to its name, you can scroll through the site endlessly (a hip trend in recent years: Twitter, Google+, and Reddit Enhancement Suite all have a similar feature) — it’s a veritable bottomless pit of Reddit posts.

“A majority of my friends don’t use Reddit at this moment because they are too lazy to click and read the links,” Bouman wrote. “They just want visuals (images/videos); maybe this will solve it.”

In that sense, Scrolldit may have invented a new brand of lurker: the lazy, visual aesthete.

Considering Reddit’s IQ seems to have dropped over the past few years, serious redditors probably won’t have a problem with that.

Go play with the pretty new thing, they might say, and leave me with my visually flawed but vibrant community.