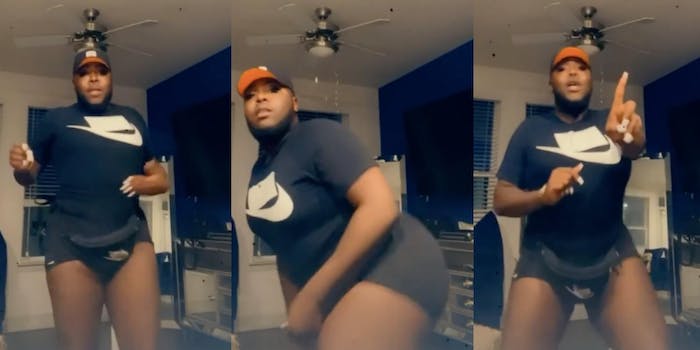 Saucy Santana gets dragged after ‘twerking for justice’

He twerked to Tupac's song 'Changes.'

People are dragging rapper Saucy Santana after he twerked to Tupac’s song “Changes” while using a “justice for George Floyd” hashtag.

The rapper also caught some heat earlier on Sunday evening after he posted a photo of himself holding posters, acting like he was at a Black Lives Matter protest.

The sign is making reference to the viral video of Floyd, the 46-year-old Black man killed in Minnesota after a police officer knelt on his neck for almost 10 minutes. In the video, Floyd can be heard pleading for his life and saying, “I can’t breathe.”

But the rapper raised eyebrows when one of the pictures circulating on social media showed a person with him holding a sign that reads, “All lives matter.” The picture was not on Saucy Santana’s social media accounts on Monday morning.

People also couldn’t believe that he “twerked for justice.”

“I know I did not just open up Instagram to see Santana twerking to ‘Changes’ by Tupac,” one Twitter user wrote.

But the rapper didn’t stop there. He then created an Instagram story defending his decision saying he “got up” and took his “energy” to pay a makeup artist and hairstylist, buy clothes, purchase posters and markers, and hire a photographer.

Social media users were quick to clap back saying he should have used that money to benefit protesters.

“Santana saweetie…all that money for hair, clothes, makeup, and posters could’ve been used to donate to anyone’s fund,” Twitter user @shareeias wrote. “The fact that you booked a photoshoot instead of actually going out to protest says a lot about you.”