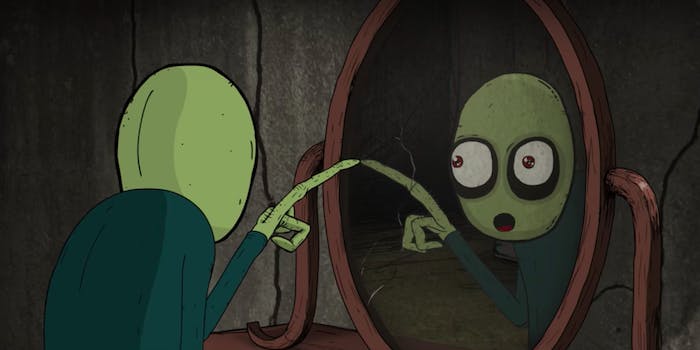 ‘Salad Fingers’ is back after 5 years—and creepier than ever

No rusty spoons—but plenty of weird.

The moment you’ve all been waiting for is finally here: Salad Fingers is back after five years—and it’s just as bizarre as ever.

Salad Fingers first hit the internet in 2004 and was viral before viral was even a thing. Creator David Firth released the 11th episode Wednesday on YouTube. It was funded by Patreon supporters who have been anxiously waiting to see what Salad Fingers and Hubert Cumberdale have been up to for the last five years.

The new episode is titled “Glass Brother” and is 15 minutes of creepy characters and scary revelations. It turns out a lot has been going on since we last caught up with the gang. First, Salad Finger’s Glass Brother turns out to be his own reflection. Then a big twist reveals that Salad Fingers is trapped in a mirror world, and his real name is Andrew Hands. WHAT!? I won’t spoil it anymore. You can watch the full episode yourself here.