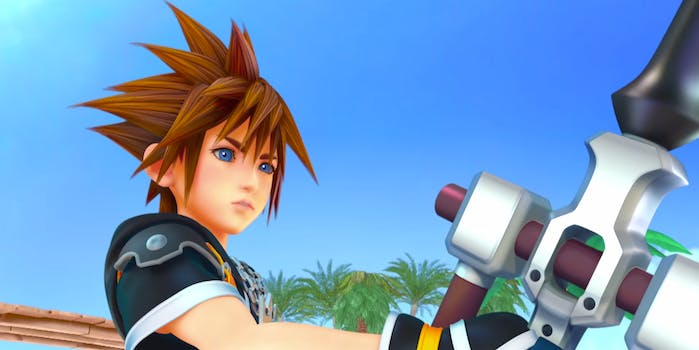 This was 14 years in the making.

No more waiting, anticipating, and begging. After what seems like an eternity, Kingdom Hearts III is finally upon us.

It's all been leading up to this. The ultimate battle for Kingdom Hearts is upon us.

Get your copy now if you haven't already!

It’s been 14 years since Kingdom Hearts II debuted on PlayStation 2, and while there have been several spinoffs and related games released in that timeframe, fans have been clamoring for the conclusion to the main trilogy since, well, the second one ended. Sure, there were handheld iterations that helped to fill in the blanks for the series’ oft-confusing story, but those did little more than act as a Band-Aid to make the wait for the newest game feel somewhat less like an eternity.

Kingdom Hearts III is the final entry in the main trilogy, and follows Sora, Donald, and Goofy on their quest throughout various Disney worlds, such as Tangled’s Kingdom of Corona, Toy Story’s Toy Box, Monsters, Inc.’s Monstropolis. Why are they there in the first place, you ask? Oh, goodness us, we aren’t going to spoil any of that after you’ve been waiting so long to play.

As you can imagine, the elation, the excitement, and the memes are deep. Some folks are just happy they’ve finally got the game. Others are making us laugh so hard, we’re spitting out our sea salt ice cream.

As I told people and friends, “ I won’t be excited about Kingdom Hearts lll until it’s physically in my hands.” Well guess what?! I’m excited!!! pic.twitter.com/qv2ZH2NRu3

Me: Hey, let's be productive and get things done!
Also me: -addicted to Kingdom Hearts 3 and get's nothing done-

I totally didn't stay up until 6am playing Kingdom Hearts 3 pic.twitter.com/Wgrkre81kL

Played Kingdom Hearts for 3 hours last night on the midnight release, and had to wake up at 5:30 this morning….

By some miracle, I’m not dead yet.

Me on my way to GameStop to pick up kingdom hearts 3 pic.twitter.com/72jdx16MnE

Even Sonic the Hedgehog‘s social media team is congratulating the Kingdom Hearts team on the game’s huge launch. It’s big news, after all.

To not show some love to the @KINGDOMHEARTS team on their launch today would be heartless. Congrats, you guys! pic.twitter.com/BEG1duDJdo

If you’re just now digging into Kingdom Hearts III today, or had a sleepless night from marathoning it, we salute you. Go out there and be the best keyblade-wielder you can be!

With both Kingdom Hearts III and Resident Evil 2’s remake out this early in the year, what a time to be alive for video game fans.