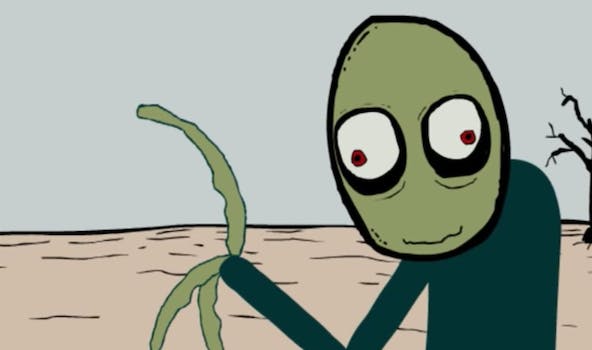 Salad Fingers. Those two words are sure to evoke a moment of nostalgia as you reminisce on the moment you were introduced to the online series and its bizarre titular character, who speaks of his obsession with touching rusty objects. “The feeling of rust against my salad fingers is almost orgasmic,” he says in a creepy voice in the first episode.

David Firth released Salad Fingers on Newgrounds, an online entertainment and social media website, in July 2004. Since then, Firth, an English animator, video artist, and writer, has developed a strange world full of other even strangers creatures, including an armless human, a big-eyed mutant, and a bisected rotting human corpse. There’s also a trio of fingers puppets—Hubert Cumberdale, Marjory Stewart-Baxter, and Jeremy Fisher—that are “friends” to Salad Fingers. The series gained a cult following and spawned countless memes. Now, five years since the release of the tenth episode, Firth is prepping for Salad Fingers’ long-awaited return. He plans to release a new episode in December that will be available on YouTube.

Salad Fingers is memorable because it embodies and reflects early internet culture. Chain emails of the ‘90s gave rise to creepypasta—horror-related legends or images that are shared on the internet—and other equally disturbing internet flash animation series like Happy Tree Friends. Salad Fingers captured the comically demented and strange underbelly of the internet, and the more viewers immersed themselves in the world the more their initial curiosity became an unsettling fascination. The series also provided a moment of self-reflection: Why do we enjoy watching fucked up stuff on the internet?

Salad Fingers and many of the characters a part of the series had existed even before Firth set out to make Salad Fingers. Inspired by the likes of The League of Gentlemen and South Park, he used Adobe Flash’s flash animation to create the series, the platform helping bring Salad Fingers’ unsettling mannerisms—from his slow head tilt to his elongated fingers sensually caressing items—to life. As for the voice, Firth took inspiration from his grandpa and one of pop music’s most iconic artists—Michael Jackson.

Adding to the unnerving atmosphere of the series is the music, which features work from Boards of Canada, Brian Eno, Aphex Twin, Sigur Ros, and Firth himself. “I’ve never heard from them,” Firth said of the musicians.

Over the years, fans have tried to make sense of Salad Fingers. One of the earliest forums dedicated to the series was made on August 2, 2004, on Newgrounds. Titled “True Meaning of Salad Fingers,” the forum finds user zhangmaster offering his theory on the identity of Salad Fingers—a murderer.

“SF is a cannibalistic schizophrenic who hides the fact that he is a killer to himself with his alter ego Hubert,” zhangmaster wrote. “He has a morbid fascination of blood, and parades around in the skins of victims he kills through ‘Hubert”…No one makes sense in SF’s reality, but they probably do in OUR reality. The film is shown entirely through the innocent eyes of SF.”

Multiple fan theories have also been offered on Reddit and YouTube, most notably The Film Theorist’s two-part video series that attempted to explain Salad Fingers. In 2016, Matpat, better known as YouTube personality The Film Theorist, released two videos in hopes of uncovering “the truth behind one of the darkest series on YouTube.”

The primary theory Matpat makes is that Salad Fingers takes place in the UK in 1939, relying on Salad Fingers’ constant referencing to The Great War throughout the series.

“1939 is a crucial year since it falls right between World War I and the start of World War II,” Matpat explains. “While the U.S. referred to [World War I] as the European War during those years, Britain preferred calling it The Great War at least until the 1940s. Based on all this evidence we know that Salad Fingers is set in a version of the UK in 1939. One still grappling with the very real effects of the first World War but right before the outbreak of the second one.”

Both videos have amassed close to 20 million views combined and even received a response from Firth himself, with the writer sharing the first video as well as leaving the following comment on it too: “I’m dying to find out what it all means.”

However, Firth dismissed the theory on Twitter last year, writing: “Just to be clear I was very honoured to have my work pulled apart and speculated over, but the conclusions reached were just not at all what I was aiming for.”

“I was just laughing so hard,” Firth said of the theories. “They were taking it so seriously when it’s a joke.”

“He’s not insane or sane,” he said. “I see him as an animal—not a mentally ill human.”

Still, the theories reflect the popularity of the series. And even in its absence, fans are rewatching the episodes of Salad Fingers that are online, with Firth releasing a continuous video of all 10 episodes back in 2014. A handful of comments have popped up in the last month, many of them voicing the same confusion and discomfort fans did when the series first dropped.

Firth confirmed that Salad Fingers would return in 2017. In October, he released a video in which Salad Fingers thanks the 1 million subscribers to Firth’s YouTube channel. Now we’ll finally get to see the 11th episode in a matter of weeks.

Firth gave the Daily Dot a hint of what we can expect. “Without giving too much away, I will say that Salad Fingers is obsessed with a handheld mirror and he wants Cumberdale to be a real boy,” he said.

Salad Fingers foreshadowed the internet meme culture that has become commonplace today. But it’s also noteworthy that the series has maintained relevance and continues to bring in new fans well since its debut, considering how quickly the internet moves on from viral moments.

“I’m glad people are watching the old episodes,” Firth said. “It’s nice because then I don’t feel like I have to make 200 episodes. I wish I could make [episodes] more frequently and maybe at some point, I’ll get a team to help out. But it’s hard to do that when this project is so personal to me.”