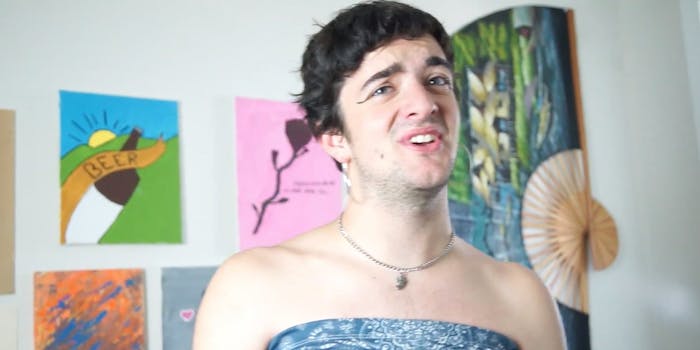 Ryan the Leader got ratioed for an outdated video that mocks women.

It’s a rule that no matter what women do, a man will come along to make fun of them for it. It’s like the “If She Breathes, She a Thot” meme only from the inside out: if women like something, men will turn up en masse to tell them it’s garbage.

Twitter user Ryan the Leader (@ryantheleader), who also runs a YouTube comedy channel, decided to post the following video in which he does an impression of what he imagines women on Twitter are like. There’s a lot of whining about astrology and what is probably an attempt to twerk coupled with some revealing statements about what he clearly thinks women are like.

A highlight was his repeated “men are trash because a man was mean to me one time” impression, revealing what might be a tender spot for him. It was something both men and women on Twitter noted in response to the video.

I wonder why they think men are tra— oh. Yeah.

There were some truly cutting reviews, with Zach Hershel saying, “I’m genuinely shocked that NONE of these jokes land. Like you didn’t even accidentally do one funny thing.”

I'm genuinely shocked that NONE of these jokes land. Like you didn't even accidentally do one funny thing.

maybe try doing something where you don’t have to be funny. multiple career options where it’s not a requirement!

I feel suddenly closer to death after having watched that. Like, I stared into the witch's eye and saw that video as the source of my expiration. pic.twitter.com/Rlz97o6sue

Maybe Ryan’s a time traveler? As @JohnnieBratwurst points out, this would have landed well in 2011 (though it wouldn’t really have been funny then either).

Twitter user Annie (@kissinboothgirl) helpfully summarised the video for those unable to sit through it: “just say u hate women and go.”

And real questions were raised about men trying to work as comedians. Are they even funny? Twitter user Mira Sanger (@JuicedGender) thinks this is proof they aren’t, though it’s hardly fair to judge all men by one abject failure.

There was some speculation into his personal life to try and understand how on earth someone could think this qualified as comedy. Maybe he got his heart broken and now he’s as bitter and twisted as the women he’s convinced all say men are trash are? Aw.

This gives off major “I was hurt by an e-girl” vibes. This absolutely ain’t it dude

Maybe its some kind of ironic meta-commentary on the kind of men who actually think like this? After all, as Twitter user MORK (@MORK_MORK_) says, it’s pretty ironic “producing such leaden garbage comprised 100% of overtrodden hacky ‘jokes’ only to finish off with “i don’t have a personal opinion i just listen to everybody else’s.”