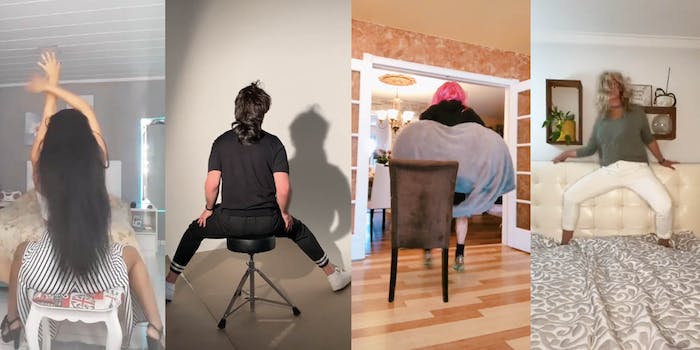 The 2016 song “River” by British singer-songwriter Bishop Briggs has been a staple of dance studios on YouTube for at least two years now—by dancers who perform seductive, sultry moves by sitting backward on a chair, facing away from the camera. More recently, however, the song and dance routine has made its way to TikTok, where many users are spoofing these videos with “Run Me Like a River” parody dance moves

The first known instance of the “Run Me Like A River” dance appearing on the platform, according to Know Your Meme, occurred in June of 2019, when TikTok user Lidia Sabini uploaded the following clip—complete with strobe effects. In the 10 months since it was uploaded, the video has received nearly 730,000 “likes,” at the time of this writing.

In the months that followed, other users began parodying her “Run Me Like a River” video, particularly Sabini’s long, flowing hair and, uh, thicc backside. Some of the more popular examples came from verified user Joe Albanese and TV host Howie Mandel. (Albanese and Mandel’s videos have received nearly three million and over one million likes since being uploaded, respectively.)

Others spoofed the video by dressing as Deadpool, staging “Run Me Like a River”-related accidents, and so on.

And even a … *checks notes* … a police officer got in on the fun? Cool, cool.

The meme took on new life this month, however, when a somewhat older TikTok user, Natalie Chalwell, posted her own version of the “Run Me Like a River” challenge with the caption: “When you’re sent to your room for being naughty.”

Say what you will, but the lady has got moves! This is probably why her “Run Me Like a River” video is now nearing one million likes since being uploaded on April 5. But given that the TikTok platform tends to skew younger, some users are riffing off of Chalwell’s contribution by pretending that she’s their mom or teacher.

Hey, there are worse uses of your time in quarantine, so go on and keep those “Run Me Like a River” videos coming!