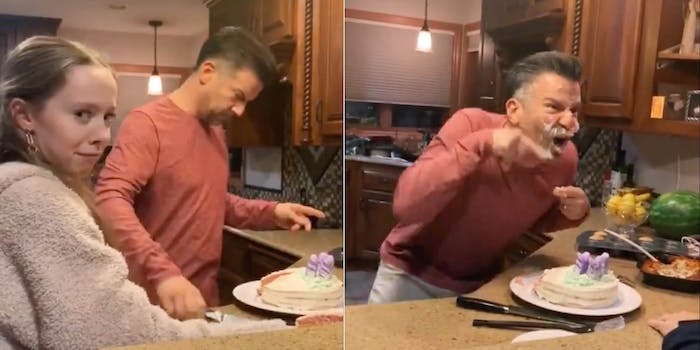 People are in love with the dad behind this ‘Dadosaur’ TikTok

Millions of people are sequestered in their homes trying to keep their cheer up through all the anxiety, panic, and death. TikTok has come through for us in this trying time—and user @olivemannella is brightening things with uploads of her “Dadosaur.”

On Monday, users discovered an Easter-themed Dadosaur video on Olive’s page. It may have languished in only partial online fame if not for Twitter user Carly Grisham, who stumbled across the video and reposted it. From there, Olive and her reptilian father Frank were everywhere.

The video shows Olive’s father doing his paternal duty and cutting a beautiful Easter-themed cake. After watching him set aside a slice, Olive’s sister poses a question. “Hey, do you think Dadosaur wants some cake?”

Frank lights up at the prospect. His wife… not so much. She immediately protests the suggestion, but it’s too late. Her husband has already been replaced by his scaly counterpart. He begins screeching and pecking at the pristine cake on the table, soon reducing it to tattered crumbs. He even mounts the counter—cake all over his face—squawking and chirping at his wife. In the background, Frank’s daughters can be heard dissolving into delighted laughter.

People everywhere were taken in by the charming video.

Many future Dadosaurs were inspired by the display of ultimate dad-ness. “This is gonna be me,” one Twitter user promised.

Other people pointed out that the mother’s protests were likely all for show. “The mom protesting like this isn’t the EXACT reason she married him,” one person wrote.

For anyone who already watched Dadosaur show that cake who’s boss a few dozen times, don’t worry. There’s more. So much more. In fact, the majority of Olive’s TikTok account is comprised of charming, wholesome Dadosaur videos.

In each, Frank is in the midst of a regular, mundane task when his daughters invoke the name of Dadosaur. As if a cranial implant forces Frank to disappear and Dadosaur to appear, Frank transforms into his goofy, cawing counterpart every time. His wife’s halfhearted protests and the delighted laughter of his daughters serve as the soundtrack to every video.