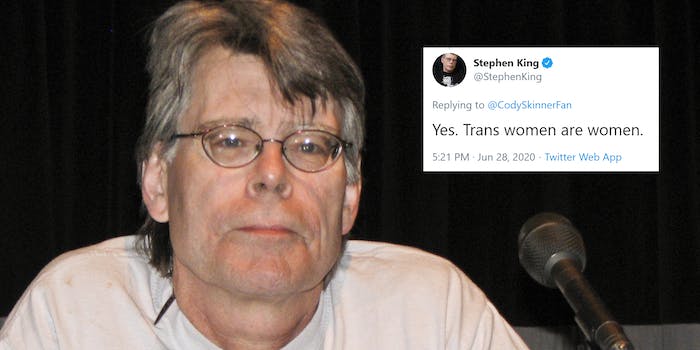 In what has to be one of the fastest Twitter u-turns seen to date, J. K. Rowling went from effusively praising Stephen King after he shared one of her tweets to deleting her praise and unfollowing him just hours later when he sent a follow-up tweet saying “trans women are women.”

It all started with yet another long Twitter thread by Rowling attempting to paint trans equality as a threat to cis women’s safety. Using the apology from British politician Lloyd Russell-Moyle—over his accusation that she was weaponizing her experiences with domestic violence against trans people—as a starting point, Rowling segued into the danger she believes self ID laws pose to cis women. One tweet features an Andrea Dworkin quote: “Men often react to women’s words—speaking and writing—as if they were acts of violence; sometimes men react to women’s words with violence,” along with the statement from Rowling that “It isn’t hateful for women speak about their own experiences, nor do they deserve shaming for doing so.”

This was the tweet Stephen King retweeted, and which had Rowling tweeting that she “won’t ever forget the men who stood up when they didn’t need to” and that her love for him “reached—maybe not Annie Wilkes levels—but new heights.”

However, while many, including Rowling, took King retweeting part of her thread as an endorsement of her position on trans women, he was to prove them wrong only hours later. Replying to a tweet in which King criticized the Republican party’s decision to host an open convention in Florida, Twitter user @CodySkillerFan asked him, “You should address the TERF tweet. By telling us constant readers if you believe trans women are women.” In response, King tweeted a simple “Yes, trans women are women.”

It’s unclear why King retweeted Rowling’s original tweet in the first place, or if, like Mark Hamill, he was unaware of the transphobic context when he shared it. The Daily Dot has reached out to King for comment and will update this article if he responds. However, his response to being asked for clarification on his stance is clear and unambiguous—and apparently completely unacceptable to Rowling who went on to both delete her previous praise and unfollow his account.

Along with mocking Rowling for her mistake, Twitter users are busy pointing out how little Rowling’s feminism seems to actually care about women beyond weaponizing cis women to attack trans people. Twitter user @marysuewriter said:

“Rowling tweeting a thank you to stephen king for retweeting her feminism tweet, and then deleting her thank you after he tweeted ‘trans women are women’ to someone else, is example #9999 that terfs are more interested in being anti-trans woman than they are in being pro-cis woman.”