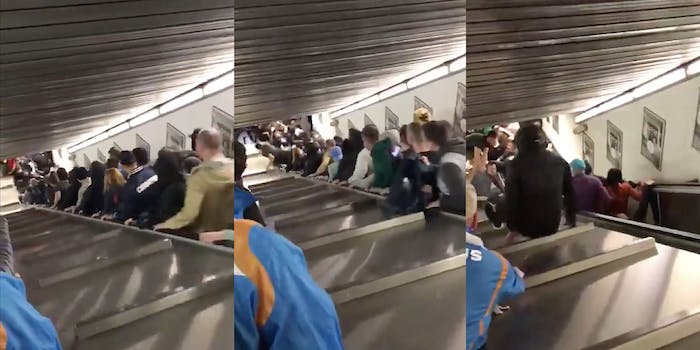 A situation of nightmares happened in Rome on Tuesday when a malfunction caused an escalator to speed up and jam passengers into a chaotic crowd as they descended. Italian officials said 20 people were injured, CNN reports.

A 20-second clip circulating on Twitter shows the horrifying accident in action. People can be heard yelling and screaming as the escalator rapidly hurls them downward and into bedlam; a brave few clamber to the median of the escalator and try to pull others being trampled from the crowd.

CNN reports that most of the people involved in the incident were Russian soccer fans headed to see Roma play CSKA Moscow in a Champions League match.

It’s unclear what caused the escalator’s malfunction, but local authorities are investigating. Rome’s fire brigade tweeted a photo of the damaged escalator.

The mayor of Rome, Virginia Raggi, said in a Facebook live video that she expresses “solidarity to the injured.”