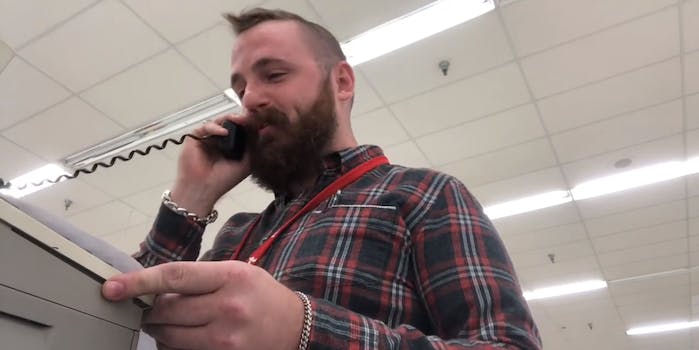 He had been an employee for 18 years.

Goodbyes are always hard. Most people have to say goodbye to a few different jobs in their lifetime, but when your workplace is a second home, it’s that much harder. For Joshua Englert, who worked at McMurray Kmart in Peters Township, Penn. for 18 years, saying goodbye was a real challenge.

Sears Holdings, Kmart’s parent company, filed for Chapter 11 bankruptcy on Monday, Oct. 15. It announced in a statement that it would begin closing 142 unprofitable stores as the year comes to a close, which adds to the 46 unprofitable stores that are likely to be closed by November. Englert’s Kmart, store number 4770, closed its doors on Sunday, Oct. 14.

Englert started the announcement with humor: “I wanted to take this opportunity not to sell you 40-cent plaid skirts or 5-cent panties, but instead to thank you for supporting a lifetime of memories.”

He struggles to keep the emotion out of his voice as he continues. “A sincere thank you to those people that have made their store, this store, a second home.” he said. “I worked for Kmart for 18 years, more than half of my life. I am the man I am today because of the people that I’ve met here at Kmart.”

Englert goes on to list the struggles and saving graces of the retail world. “The inventories, the Black Fridays, the long lines for Tickle Me Elmos and PlayStation 4s when we only had three of them,” he said. “Thank you deeply to the Kmart McMurray team, you guys have made it all worthwhile.”

Have pride in your work wherever you work. There is no price on the benefits he's rec'd. Kmart employee chokes up as he makes his final announcement before the store closes permanentlyhttps://t.co/Wf97RTEAAh

I hope this man received sincere job offers. Eighteen years dedicated to one employer is to be commended.https://t.co/L1QBryH5qY

While others took the opportunity to comment on the state of the retail industry.

This article and video pretty much explains the state of brick and mortar retail right now!https://t.co/bsRlUgIWAd

This store is near my house. I shopped here often over the last two decades. Sorry to see it go, and the employees lose their jobs.

Kmart employee chokes up as he makes his final announcement before the store closes permanently: https://t.co/FJOHUrrfMr via @YahooLifestyle

The sad news of another brick 'n mortar store giant gone. My 23 years in retail store mgmt ;career is a thing of the past as well….https://t.co/gigxQQsbgA

I have fond memories shopping Kmart with my family as a kid. It is sad to see that era go away https://t.co/vIX9X1C5cr

The first official Kmart opened its doors in Garden City, Mich. in 1962. Sears Holdings has only been operating since Sears and Kmart merged in 2005, but Sears itself opened its first retail stores in the 1920s. Sears Holdings announced a restructuring of its upper management after it failed to meet a repayment deadline of $134 million that was due on Oct. 15.

Employees and shoppers across the country will see their lives change with the wave of closures coming to Kmart and Sears brick-and-mortar stores. Englert spoke to WOGI-FM 104.3 about the closure. He said he has received messages about potential jobs.

“It hit me when I realized that we’d be splitting up, and that’s what I got emotional about,” he said. “These people have definitely changed me. I just wanted to make sure they knew what they meant to me.”