Complaining about tl;dr is just too tl;dr

One writer's rant about our tl;dr culture misfires.

Is Arrested Development really worth taking the time to analyze? One reviewer thinks so—but he’s pissed you aren’t doing it right.

In the Internet age of 140 characters, brevity has not only become the soul of wit, but of meaning itself. On the Internet, if you can’t make your point succinctly, you might get the saying “tl;dr” in reply. “Too long; didn’t read” usually means, in Internet terms, that someone is wrong—or at least too passionately invested to make their point heard through all the ranting.

At online culture magazine The Nervous Breakdown, Tom McAllister has a wordy rant of his own about how the shutdown of tl;dr encapsulates everything that’s wrong with the state of modern media. Using the example of a number of Arrested Development bloggers who rush to write immediate reviews after each episode airs, McAllister claims that the payoff of immediacy over complexity isn’t worth it:

[T]his culture of knee-jerk analysis furthers the destructive notion that just because it’s possible to do something quickly then it’s necessary. The best critics offer valuable insights into our culture and help us understand art in a new way, furthering the discourse around important social issues. This devotion to speed reduces the role of critic to that of an opinionator, which is an entirely different, and less useful thing. Further, it subordinates the language itself, stripping it of meaning and consequence, asking it to exist solely as a vehicle to drive clicks and ads.

McAllister goes on to claim that the dismissive tl;dr response has now become a valid argument in our society—and worse, that we’re being hindered by it in every facet of life from education to entertainment.  “The people who guide our discourse are the ones willing to subjugate themselves by offering vapid gut reactions rather than saying something worth saying.”

On Reddit, where McAllister’s rant attracted some attention, most commenters were skeptical.  Many pointed out what they considered to be McAllister’s misunderstanding of what tl;dr actually means, and how the phrase is generally applied in common usage. Tl;dr most often gets trotted out in Internet discussions, typically either in threaded forum discussions or in replies to a blog post. When someone replies with tl;dr to a post or another reply, it could mean that they are dismissing the OP (original poster)’s argument as being incoherent. It could also mean that they simply aren’t willing to participate in the argument anymore and are actively dismissing what the OP is saying. 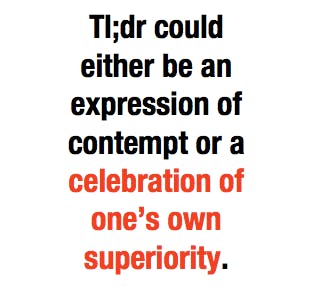 Depending on how you look at it, tl;dr could be either an expression of contempt or a celebration of one’s own superiority over the person whose passion has led them to heights of verbosity. On the other hand, to those readers and writers who like to engage in thorough debates, you might appear to be celebrating your own ignorance by refusing to read deeply.

Because tl;dr is rarely used outside of the context of Internet debate, it’s difficult to apply it to the larger point McAllister seems to want to make about general media consumption. One Redditor, royaleavecdufromage, sums up McAllister’s post by claiming that he’s really arguing against the death of the newspaper in the face of the Internet and the 24-hour news cycle:

We now no longer have community-based newspapers who consistently have journalists working the same beat, day-in, day-out… I think the author was more-so talking about this phenomenon of monetization, and using vapid Arrested Development reviews as an example.

McAllister doesn’t actually specifically mention newspaper journalism, but he does seem to resent blog culture for exacerbating the “how soon is now” problem. He strongly implies that online bloggers who are reviewing shows like Arrested Development are only motivated by the wish to get to a story first:

Within thirty-six hours of the release of the long-awaited fourth season of Arrested Development, reviews—not just of the first episode, but of the entire season—started appearing online. Reviewers watched the full eight-hour season in one or two sleep-deprived binges, then spent the remaining twenty-eight hours spewing out essay-like things, some in excess of 3,000 words, purporting to offer an authoritative viewpoint on the show. …

Arrested Development, a show more intricately plotted than most dramas and featuring several layers of gags in nearly every shot, has long been renowned for its unprecedented levels of complexity. … How, then, are we supposed to believe that any of these reviews, churned out under pressure of an artificial deadline, offers anything like meaning or perspective?

This is a hefty crime to lay at the feet of an Arrested Development reviewer, to be sure. It’s also puzzling that in the context of a complaint about tld;r it’s not the length but the speed of these reviews that McAllister is dismissing. It’s as if he’s saying that a long and coherent review is fine—except when it happens too quickly, at which point it becomes part of a dismissive tl;dr culture.

On the other hand, McAllister also shows contempt for attempts to be thorough and long-winded about the wrong topics: “Is there a more trivial use of the English language than 1500+ words recapping a single Real Housewives episode?” So fast is bad, and long is good, except when it isn’t. What exactly is the right length and the right time, McAllister? 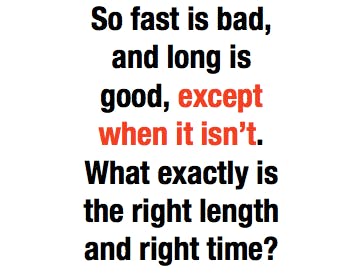 The real offense here is that McAllister has completely missed, or chosen to ignore, the point of why someone would want to write (or read) a review quickly.

For a show with such an enormous cult following and high degree of anticipation as Arrested Development, fan mentality takes precedent over these esoteric journalistic concerns. Fans prioritize celebration and shared communal experience over copious intellectual thoroughness. Review sites like Television Without Pity become beloved not because of the thoroughness of their reviews (though they are in fact extremely thorough), but because they exult in the shared community around the shows they review. Fans debate, argue, and make their own recaps and reviews of the shows they love.

McAllister also somehow ignores the fact that Arrested Development fans are among the most analytical and detail-oriented; they return to the source material again and again to revisit, rethink, and reconsider their original opinions. The goal of churning out a 3,000-word review is not to write the ultimate proscriptive lesson for all comers on what AD means, but to dive headfirst into the discussion—to be a part of the first flush of excitement, and to connect your ideas to others. Reviewing early is about generating conversation, not piggybacking on a conversation that would already be happening if you showed up late to the party.

Not all reviewers will write 300,000,000 additional words on those episodes even after their initial reactions—but many will, because that is what these fans do. Not only that, if you’re a reviewer who’s spent years obsessing over Arrested Development—who knows the language of the show as a series its fans by heart—then you’re actually probably perfectly well-equipped to quickly write a 3,000-word review that gives the reader interesting points and a greater understanding of the episode.

Ultimately, McAllister’s argument can’t withstand the number of contradictory pieces he attempts to knit together: long reviews are good, except when they’re applied to trivial parts of pop culture, and/or churned out too quickly, in which case they’re synonymous with the death of coherent and cogent journalism. There’s just too many qualifiers there—and too much dismissive generalization.

Unsurprisingly, the first response on McAllister’s article is just that: