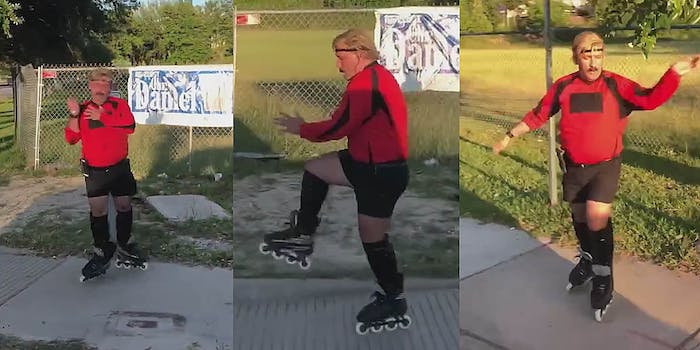 The rollerblader who blew up on TikTok has gone viral before

Juan Carlos has been entertaining drivers in Houston for two decades.

In the clip, he’s ready for the camera. He sees the car coming, and instantly starts twirling. “Eat your heart out, Tonya Harding,” someone screams.

Keith Chapman posted the clip to TikTok last week, showing a man in a red shirt and rollerblades spinning on a street corner. Twitter user Alyssa Baltierra reposted the clip with the comment, “I can’t stop watching this.” It has more than 5 million views.

I can’t stop watching this pic.twitter.com/MNYH2rxdW1

The man in the video is Juan Carlos Restrepo, and he’s been entertaining drivers in Houston for 20 years. He’s better known as Juan Carlos, and this isn’t the first time he’s gone viral: Videos of his roller-dancing have been circulating for years, making him a regional attraction.

In a 2014 Houston Chronicle profile, Restrepo, who grew up in Colombia, said he took to skating as a kid after a neighbor gave him a pair of skates. In 1999, he started rollerblading around the corner of Montrose and Allen Parkway in Houston for exercise; when a car full of women stopped, he “gave them a little shimmy and shake,” and started to pick up fans.

In 2014 he appeared on America’s Got Talent, roller-dancing in a shiny red jumpsuit to “These Boots Are Made for Walkin’.”

In the Twitter thread, several people seem to already know who he is, including one man who had Juan Carlos perform at his wedding.

I got one tooo he so fly pic.twitter.com/sn2OpZU8t5

And of course, someone has already put the Succession theme over it.

this just needed the succession theme to be perfect pic.twitter.com/3BqVeN2gRf