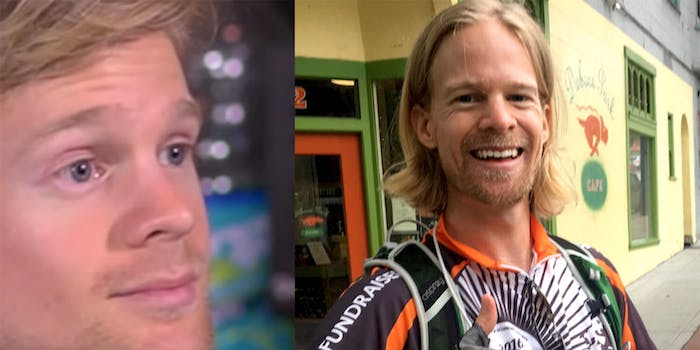 Since 2017, there’s been one go-to meme for expressing surprise/confusion online: The blinking white guy.

me: *buys stuff*
bank account: *deducts the money I spent*
me: pic.twitter.com/06MHbJonjv

Everyone knows the meme but few people know the man behind it. In 2013, Drew Scanlon was just another guy making a video game show with his friends. During an episode of “Unprofessional Fridays” on the Giant Bomb channel, Scanlon reacted to one of his colleagues saying “I’ve been doing some farming with my hoe here” with raised eyebrows and several blinks.

It took four years, but in 2017 people turned his reaction into a GIF, and a meme star was born.

me: ill take a biology class, im smart enough for this just watch me
teacher: cells
me: pic.twitter.com/fHJJsPLioO

Scanlon has publicly acknowledged the meme before, going so far as to recreate the blinks for a segment on Good Morning America.

But now he’s using his meme stardom in a different way. Scanlon is participating in “Bike MS“—a national bicycle ride that raises money to support Multiple Sclerosis research. Thanks to his internet fame, he’s already raised over $32,000.

Hi Internet! I'm Drew and THIS IS MY FACE.

If this GIF has ever brought you joy in the past, I humbly ask you to consider making a donation to the National MS Society. It would mean a lot to me and to those I know affected by the disease!

You're amazing, Internet. Your response has attracted news outlets around the world, giving us incredible reach!

Without you, we wouldn't have just hit TWENTY-FIVE THOUSAND DOLLARS!

“I’m not usually one to toot my own meme horn but in this case I’ll make an exception,” Scanlon wrote on his Bike MS page. “You see, two close friends of mine and members of their families suffer from MS, a debilitating disease of the central nervous system that interrupts communication between the brain and the body.”

“If a fraction of those who have seen my goofy face donated to MS research, I have a feeling we could kick this thing in no time!” he added.

Scanlon’s ride ended on Sept. 22, but donations remain open until November. Those who wish to donate, or plan their own ride, can find more information on the Bike MS homepage.