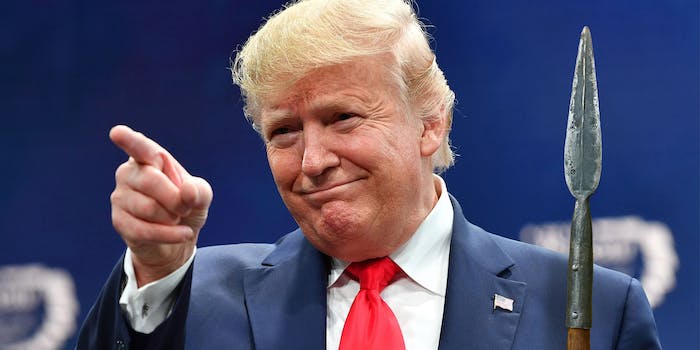 Is this jury tampering?

Republican senators were warned “vote against the president and your head will be on a pike” regarding the impeachment trial, reports CBS News.

The revelation and threat reportedly came from one of President Donald Trump’s confidantes.

A @POTUS confidant tells CBS News that GOP senators were warned: “vote against the president & your head will be on a pike.”

Clearly the threat wasn’t meant to be taken literally. It is a fitting warning, nevertheless, given how enthralled Republican congresspeople are with Trump’s endorsement on the campaign trail.

The practice of publicly displaying severed heads on pikes dates back to the Renaissance, when prisoners’ heads were placed on the so-called “Traitor’s Gate” of London Bridge. Prisoners—many accused of treason, like future Queen Elizabeth I—passed under this bridge on their way to confinement in the Tower of London.

The heads were meant to serve as a chilling reminder of their likely fate, and a deterrent to others tempted to go against the crown.

President Donald Trump has repeatedly accused a long list of people—including the Ukraine whistleblower, FBI agents, prominent Democrats such as Rep. Adam Schiff (D-Calif.), and so many others—of treason for seeking his impeachment and removal from office.

The fact that the senators weren’t actually being threatened with execution and public display of their decapitated head did little to quell the outrage. People apparently would rather have senators make up their own minds on impeachment than vote blindly based on threats from a president who seems to see no limit to his power.

#HeadonaPike started trending alongside comments like, “What the fuck? The president is not a fucking king or a mob boss. You GOP senators need to fucking stand up for yourselves and your country and do what’s right. Grow a spine.”

Many agreed with Biggan’s assessment that the threat potentially interferes with the proceedings and gives the impression that the Republican senators have been rendered incapable of impartiality.

This trial needs to be held over for the next senate term #HeadOnAPike pic.twitter.com/831zZvB9g4

Blatant witness intimidation. There’s no doubt we have a mobster in the White House 👇#HeadOnAPike https://t.co/Krsj4N1RqI

Remedial search of trump’s timeline lets us all know, republicans got the message

No one moreso than @tedcruz @SenJoniErnst @MarshaBlackburn @JohnCornyn

All in lockstep w a criminal president

According to CBS, GOP senators were warned: “vote against the president and your head will be on a pike.” We can always be sure of finding Trump on the Low Road. There’s no need to look anywhere else for the evil bastard. #HeadOnAPike #RemoveTrump pic.twitter.com/fACWsvmSKd

Trump’s and his defenders’ timelines were peppered with comments from disgruntled people referencing the allegation.

No. It looks like obstruction in plain sight … and ongoing. #HeadOnAPike pic.twitter.com/VB8aENkyLY

Hey Lil' Marco, will your #HeadOnAPike (be on a pike) when you vote to acquit? Pathetic! Biggest coverup in US history. Might as well stop tweeting about Venezuela and other corrupt countries. US now tops the list.

As it picked up steam this morning, #HeadonaPike became a meme.

— Bees Will Eat Your Face If You Keep Being Corrupt (@XRobsPunchinBag) January 24, 2020

"Nothing is wrong with threatening Senators' lives. The threat was perfect. Anyone listening would say it was the most perfect threat they had ever heard." – Trump in about 2 hours#HeadOnAPike

I’d say that #HeadOnAPike lowers Trump to King Joffrey levels, but even Joffrey at least gets more credit for showing and not telling his threat.

Electorally and – I cannot stress this enough – metaphorically, it is our job to put the @GOP’s #HeadOnAPike in the #2020Elections.

(someone will have to explain what a metaphor is to #MAGA) pic.twitter.com/wEc7moopXB

Although the story generated plenty of anger among the electorate on social media, there doesn’t seem to be much chance that it will sway Republicans.

As the CBS News noted, “So far, their heads appear to be safe.”