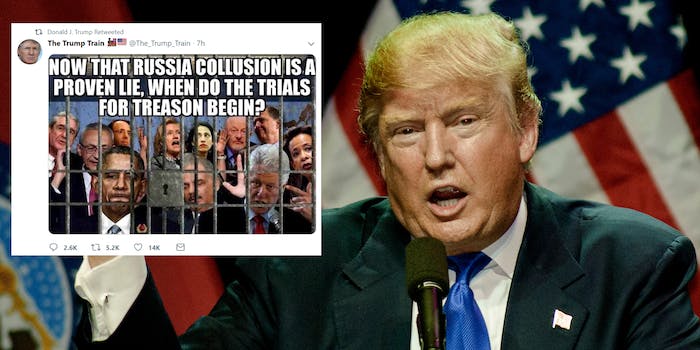 Trump retweets meme calling for prominent Democrats to be imprisoned

The Russia investigation is far from over.

On Wednesday morning, President Donald Trump retweeted a post from the user account @The_Trump_Train that showed prominent Democrats behind bars, with the caption, “Now that Russia collusion is a proven lie, when do the trials for treason begin?”

The tweet comes just two days after Special Counsel Robert Mueller accused former Trump campaign manager Paul Manafort of lying in his plea agreement, although it’s not clear specifically what he lied about. Mueller has asked for Manafort’s sentencing to be expedited in light of the new information.

A story in the Guardian also claims that Manafort met with WikiLeaks founder Julian Assange, who leaked emails stolen from the Clinton campaign in spring 2016. Manafort denies ever meeting Assange.

Trump also sent out his own tweet about his feelings on the investigation this morning.

“While the disgusting Fake News is doing everything within their power not to report it that way, at least 3 major players are intimating that the Angry Mueller Gang of Dems is viciously telling witnesses to lie about facts & they will get relief. This is our Joseph McCarthy Era!” Trump tweeted just before posting the image.

While the disgusting Fake News is doing everything within their power not to report it that way, at least 3 major players are intimating that the Angry Mueller Gang of Dems is viciously telling witnesses to lie about facts & they will get relief. This is our Joseph McCarthy Era!

It’s not clear exactly what he’s referring to in the tweet, but recent events could point to the Manafort case, or the news that conspiracy theorist Jerome Corsi was under investigation for perjury.

All week, Trump has been on one about the Mueller probe, tweeting out his displeasure with it.

The Mueller Witch Hunt is a total disgrace. They are looking at supposedly stolen Crooked Hillary Clinton Emails (even though they don’t want to look at the DNC Server), but have no interest in the Emails that Hillary DELETED & acid washed AFTER getting a Congressional Subpoena!

The Phony Witch Hunt continues, but Mueller and his gang of Angry Dems are only looking at one side, not the other. Wait until it comes out how horribly & viciously they are treating people, ruining lives for them refusing to lie. Mueller is a conflicted prosecutor gone rogue….

The Special Counsel investigation has heated up recently and is showing real consequences. Former Trump aide George Papadopoulos started his prison sentence this week, and Mueller could hand down new indictments soon.