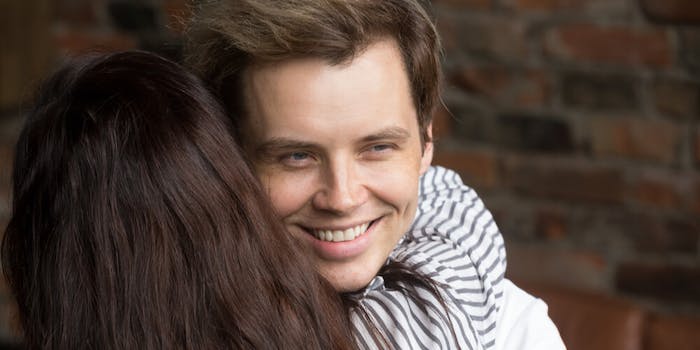 In a tale that sounds straight out of a rom-com, a man says he based his imaginary girlfriend on his real coworker—and now she’s moved into his office and seems to like him. The man, of course, turned to the subreddit r/relationships for help.

I made up a mostly fake girlfriend. Now she may become my actual girlfriend. How the hell do I go about this? pic.twitter.com/6lERwdZG6K

The imaginary girlfriend thing is less—or possibly more, depending on your perspective—weird and creepy than it sounds. Instead of being some sort of bizarre fantasy entirely in his head (the solution for which would obviously be to never tell her and also move away and become a monk), the man says the imaginary girlfriend was initially a convenient stranger whose name he used to fend family off. “Jessica” worked for the same company as him but was based in another city, and after she came into his office one time, he assumed he wouldn’t be seeing her again. The man says she was the ideal person to base his fake partner off.

In his post, the man acknowledges that making up a fake girlfriend and backstory to tell his friends and family was pretty extreme. But some commenters were sympathetic to being bombarded by family about your relationship status.

My whole family is objectively awful, but at least I never had to sit through a holiday dinner with people asking me why I wasn't married at 25. Or dating. Or asking if I was secretly gay, and was that why I didn't have a boyfriend or husband yet.

But thanks to a transfer, Jessica now works in his building—and the man reports that “we build a sort of friendship and that friendship quickly moves into some light friendly flirting.” He really likes this girl, but he’s in an awkward position since he already told his family they’ve been dating for the last 18 months.

I feel very bad for this poor dude. His family's pressure is overwhelming and he's made some poor choices.

Naturally, redditors were happy to offer advice. The most obvious solution—pretending she’s a different Jessica—came up quite a bit.

As it turns out, that’s what he’s leaning toward, too.

But many people are fixated on the creep factor—and the potential nightmare of everyone involved finding out. “Do the girl a huge favor and leave her alone,” one user wrote.

Many people also suggested therapy, both to help him develop healthy boundaries with his family and deal with… whatever this nonsense is.

Still, the scenario would actually be pretty great in a sitcom or some other piece of fiction.

And some commenters say they would find it hilarious and even charming if a man came to them with this kind of story. So maybe the man will be in luck after all.

I mean if he sounded as terrified as he did relaying it here, and clearly realised how weird it was, I'd probably find it funnier than it is weird and ask for all the details over a drink.