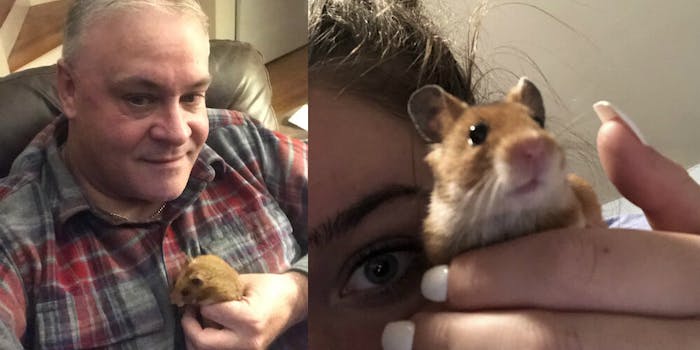 'You shouldn’t skip work. You are a lawyer, and he is a hamster.'

Steph Veerman, 19, left her hamster in the care of her father, Daniel Veerman, when she left for college. Chester, the hamster, and Daniel developed a special bond while Veerman was away. That’s why Daniel freaked out when the hamster escaped from his ball on Sunday. Veerman posted her father’s traumatic experience on Twitter.

“Please call me as soon as you get this it’s an emergency,” Daniel texted to his daughter.

my dad took over my hamster once i went back to college and ended up getting really attached and today he escaped and this goes to prove how truly pure my father is pic.twitter.com/JmTJl6jFBI

When Daniel first got put on hamster duty, he wasn’t sure how he’d get along with the pet.

“I grew up with German shepherds. I’ve never had, you know, when I first got it, it was like a mouse. It wouldn’t be my first choice of pet,” Daniel told BuzzFeed News. “But then I got attached. And even more because you’re taking care of it for your daughter.”

It was a typical case–the reluctant dad who doesn’t initially want the family pet, then falls in love and ends up taking care of it more than anyone else.

my dad: i don’t want a dog in the house!
also my dad: pic.twitter.com/u1DKLAzhZ7

Veerman assured her father that it was not his fault for the clever pet’s disappearance.

“Dad- he’s just a hamster. I don’t blame you at ALL. You shouldn’t skip work. You are a lawyer, and he is a hamster,” Veerman texted. “Dad it’s ok!”

But that did not stop Daniel from pulling out all the stops to find Chester. He told BuzzFeed News that he set up traps with peanut butter to lure the hamster out of hiding. But the nine-hour search ended happily when Daniel caught Chester, Veerman told the Daily Dot.

“This was the most stressful day since I took the bar exam,” Daniel texted his daughter after Chester was safely returned to his cage.

People on Twitter were there to support Daniel during this trying time.

“Happy you found him,” Brother Nature, who was made famous for his love of animals, tweeted.

I love your dad so much and also this is the most hilarious singular message I've ever read pic.twitter.com/pTIYuiWnMf

Veerman told the Daily Dot that she and her father are very close. She said this incident was yet another example of her father’s love and involvement in her life.

“Told him he had a lot of people on Twitter who loved him so he did his hair and posed for this pic I’m dead I love him so much,” Veerman tweeted, along with a photo of her dad posing with Chester.

told him he had a lot of people on twitter who loved him so he did his hair and posed for this pic i’m dead i love him so much pic.twitter.com/urR2WMmeDE