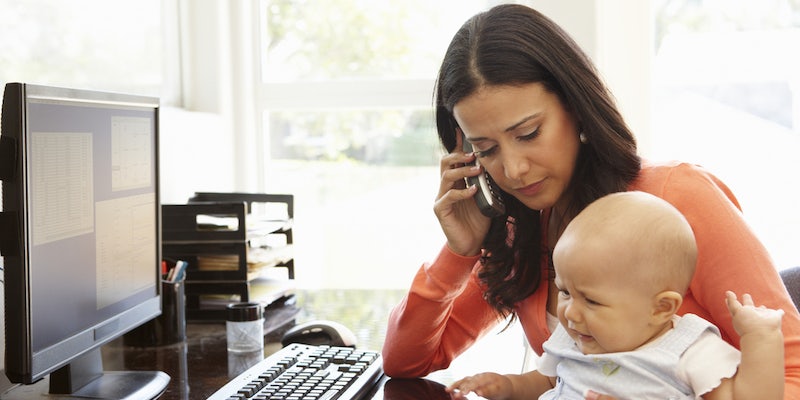 Man blasted for making his coworkers babysit his child

He came to the wrong subreddit to look for affirmation.

If there’s an asshole checklist, then the Reddit user calling himself babyworking ticks every box. Like roughly half the entries on the subreddit Am I The Asshole, he came there looking for affirmation, specifically because his wife had told him he was one. He wanted a forum full of internet strangers to tell him she was wrong. Already not off to a great start, the story then dives off a cliff when he forces two female staff members to perform childcare for him before turning around and trying to discipline them for it.

The story begins with him taking his baby to work with him while on paternity leave so he could retrieve some documents. So far, reasonably OK, as many people bring their new baby into work to show their colleagues. Where things start to go off the rails, however, is what he did when the baby started to cry.

“I told my assistant that she can rock baby or walk around the office and they’ll go back to sleep. My assistant took her outside my office by her desk and I worked on gathering what I needed from my computer.”

As the Redditors were quick to point out, taking care of his baby was in no way her job.

It got worse when he looked up from his work and remembered his baby existed. Upon discovering that, having her own work to do and no more capable of doing it around a crying baby than he was, his assistant had handed the baby to an intern and the man freaked out completely. That’s somewhat understandable. His very tiny baby was now out of sight and in the arms of a stranger, something that would make any new parent panic. But this is how he reacted to the situation:

I went over to where the intern desks are and ask where Mary [the intern] was and they said she went to the bathroom. I asked if she had my baby they said she thinks so and I asked one of the female employees if she could go to the bathroom to get her. A minute later, they both come back, baby with Mary and diaper bag on her arm.

This is the point at which it should be an alls well that ends well type of story, ideally with flowers and apologies for both women, as, once again, childcare is in no way a part of their jobs. Unfortunately, OP really is the asshole because this is what happened instead.

“In private, I told my boss that how I felt and that I would feel uncomfortable extending her a job offer at the end of her internship but the status of her employment now was up to my boss to decide.”

He also reveals, further down in the comments, that he’s given his assistant a verbal warning as well.

Dude comes in with his baby, forces his assistant to take care of his kid, said assistant is forced to hand the baby to an intern so that she can do her real job, intern changes the baby's diaper (something he should have checked himself), and now he wants to ruin her career.

Being a story of such rarely seen levels of assholery, the post immediately jumped to Twitter, leading to two social media platforms worth of people dragging this Victorian throwback of a man.

AYTA? No, definitely not. A-hole is far too kind a word for what you are. You owe both your assistant and the intern a heart-felt apology, and your company needs to seriously consider whether you should be allowed to remain in a position of authority.

“I brought my baby to the office unannounced, dumped her on my assistant who actually has shit to do, a kind coworker was thoughtful and changed the kid’s diaper so I fucking ruined her life, AITA??????? Also I get paternity leave because I’m an executive, lol”

Ask A Manager was summoned and she passed judgment.

And even the sympathetic responses think OP was unreasonable.

This new dad felt understandable, intense panic over losing his kid and channeled that fear into anger over people with less power than him. Classic! (Really he should be considering the optics of sticking female staff with childcare…)

Assistant has a job to do, which doesn't include taking care of the baby OP decided to make her problem. Intern was trying to be helpful, even though that's not her job either. I understand being protective and concerned about your child, but OP went way too far.

Some people quite reasonably pointed out that if he can’t manage work and paternity leave at the same time then he shouldn’t be trying to do both (and is it actually even paternity leave if he’s working from home anyway?).

1. It's not "paternity leave" if you're working from home
2. "I passed my baby off to someone not on leave who had actual work to do and then got mad when they tried to their own job."

YTA. Why didn’t you take care of your own crying baby?

I can't be the only one thinking how can you be working from home and on extended paternity leave at the same time?

Other pointed out how if he’s also on leave, baby care is at least half his job, but he still thought of it as “giving his wife a break”.

I’m not convinced he’s using his paternity leave to actually be helpful based on this post alone.

He definitely just stares at his wife as she cooks and breast feeds. He makes sure the newspapers are organized.

He decided to "give" his wife a break cos he's just SUCH a good guy!

I’m not convinced he’s using his paternity leave to actually be helpful based on this post alone.

He definitely just stares at his wife as she cooks and breast feeds. He makes sure the newspapers are organized.

People were all over the sexism of expecting female staff members to mind his baby while he worked, even though they also had work of their own.

Jesus, even when he gets paternity leave he still pawns off his kid on the women around him. Yes, he ITA.

Man messes up = woman suffers the consequences = patriarchy at it's finest

Naturally, everyone sided with the intern.

Yeah, YTA, dude. First off: asking your female assistant to take care of YOUR baby? And then giving her a warning because she “passed your baby to a stranger”? I hope she and the intern both quit and sue you and the company.

I really hope this guy's boss gives him the formal warning, apologizes to the assistant on his behalf, and hires the intern. What trash.

Basically, everyone is hoping he gets fired. Or at least sued by the women.

Yeah, YTA, dude. First off: asking your female assistant to take care of YOUR baby? And then giving her a warning because she “passed your baby to a stranger”? I hope she and the intern both quit and sue you and the company.