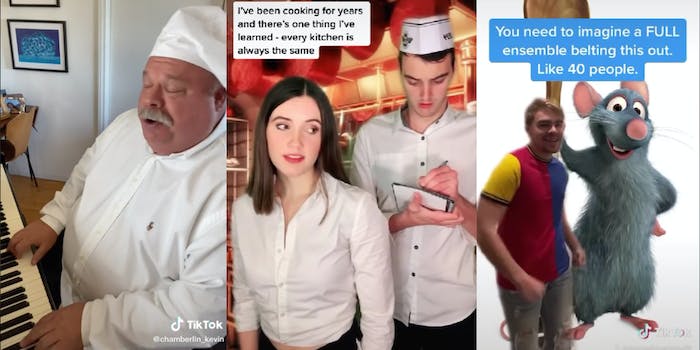 ‘Ratatouille: The TikTok Musical’ is being turned into a benefit concert

The musical phenomenon on TikTok started with one hilarious song.

The TikTok musical phenomenon, Ratatouille, is finally coming to the live stage. Seaview Productions announced Wednesday it is producing and streaming Ratatouille: The TikTok Musical to ring in the New Year.

“This event provides a once in a lifetime opportunity to harness this extraordinary outpouring of creativity and galvanize the energy behind this viral moment to create an unexpected, unprecedented, landmark response,” Seaview Productions website reads.

“Of the many incredible songs to emanate from this moment, ‘Anyone Can Cook’ from @chamberlin_kevin so buoyantly declares that anyone can cook and create. As we turn the page on a New Year, we can think of no better way to celebrate creation and creators than Ratatouille: The TikTok Musical.”

Casting and other production details will be shared in the coming weeks. Though it is not known what original TikTokers will be involved, fans are hoping to hear popular musical numbers such as “Tango for Colette and Linguini,” “Trash is Our Treasure,” and of course, “Ode to Remy.”

What started as a single humorous song, “Ode to Remy,” posted by  @e_jaccs, has become quite an elaborate production. TikToker and actor Josh Abram posted a video calling for “all musical theater nerds” to help him bring Ratatouille: The TikTok Musical to life, and TikTok delivered. Creators posted songs, dance numbers, backdrops, and artwork. It didn’t take long for the musical to come together.

Ratatouille: The TikTok Musical even received its own mock Playbill after the work started garnering attention from news outlets.

Proceeds from Ratatouille: The TikTok Musical will benefit The Actors Fund. The Actors Fund is an organization that provides financial assistance, affordable housing, and health care to those in the entertainment community.