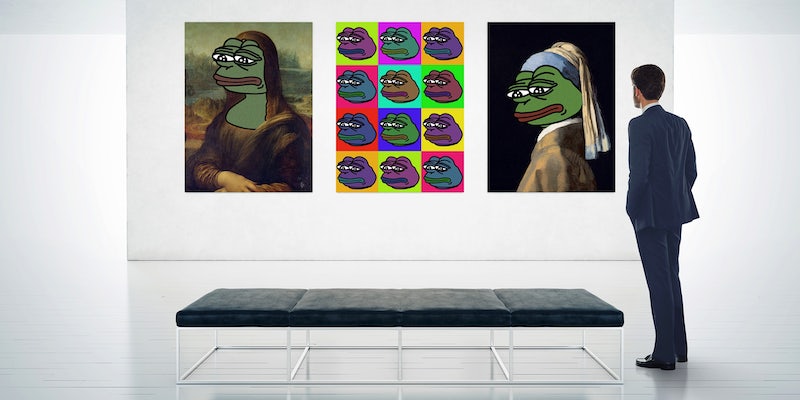 The Rare Pepe economy is real, and there’s serious money behind it

Trading images of Pepe the Frog is now a booming business.

Pepe the Frog‘s decade-long journey from webcomic character to everyman meme to alleged hate symbol has been a topsy-turvy one, but his importance to the meme economy cannot be denied. The trope of trading and collecting “Rare Pepes,” distinctive images of the famous frog, has been part of meme culture for years. And now there’s real money behind it.

A February article from Reddit’s Meme Insider, a parody trade publication dedicated to serious coverage of memes, explains how the fictitious market for Rare Pepes became a booming business.

The piece, by pseudonymous redditor JeffTheDunker, describes how the Rare Pepe economy initially functioned on a system of “Good Boy Points,” a largely fictitious currency that people would trade for new and unique images of Pepe. It started out circa 2015 as a 4chan in-joke about an autistic kid who would exchange “Good Boy Points,” earned by doing chores for his mom, for precious “chicken tendies,” and somehow they became the dominant imaginary currency of the Rare Pepe economy.

Good Boy Points were unsustainable, though, because there was no accountability in the system: Anyone could fabricate their Good Boy Point totals. In short: the points just weren’t real.

Additionally, the idea that there was value—even imaginary or purely social value—in Rare Pepe memes caused the demand for Pepes to go up, and the market to become flooded by new content.

“When [Rare Pepes] breached mainstream media outlets, early adopters and speculators around the globe packed their bags for good, as the Pepe had, in their minds, become useless,” JeffTheDunker explains in Meme Insider.

In early 2015, a poster on 4chan’s /r9k/ board, incensed at the mainstream popularity Pepe was starting to enjoy, tried to kill the meme by distributing  a collection of more than 1,200 Rare Pepes, labeled “the end is nigh, hope you cash out now.”

4chan called this Pepe massacre “the Peppening,” and it led to posters jokingly watermarking their best Rare Pepes “do not save”: 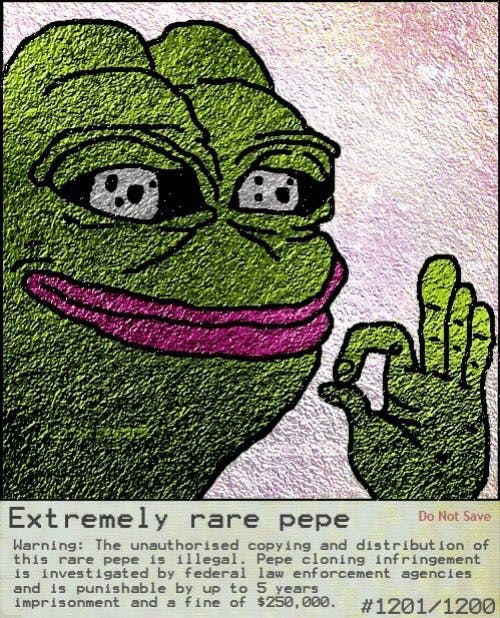 The watermarks obviously did nothing to protect the Pepes, other than making them uglier, and the Rare Pepe economy looked doomed. But what if there were a way to regulate Pepes and make them impossible to copy?

We’ve seen Rare Pepes traded on Craigslist before, where physical drawings or printouts of the frog that were offered in exchange for cold, hard cash—sometimes as much as $100. We’ve even seen them sell on eBay for nearly $100,000—probably as a joke. But JeffTheDunker also suggests there’s a real demand for unusual digital images of Pepe, even though it seems like those images should be trivial to replicate.

Enter: the blockchain. Cryptocurrencies like Bitcoin use it to make sure that digital money is unique to its owner and can’t simply be copied or faked, and now it’s being applied to Rare Pepes. 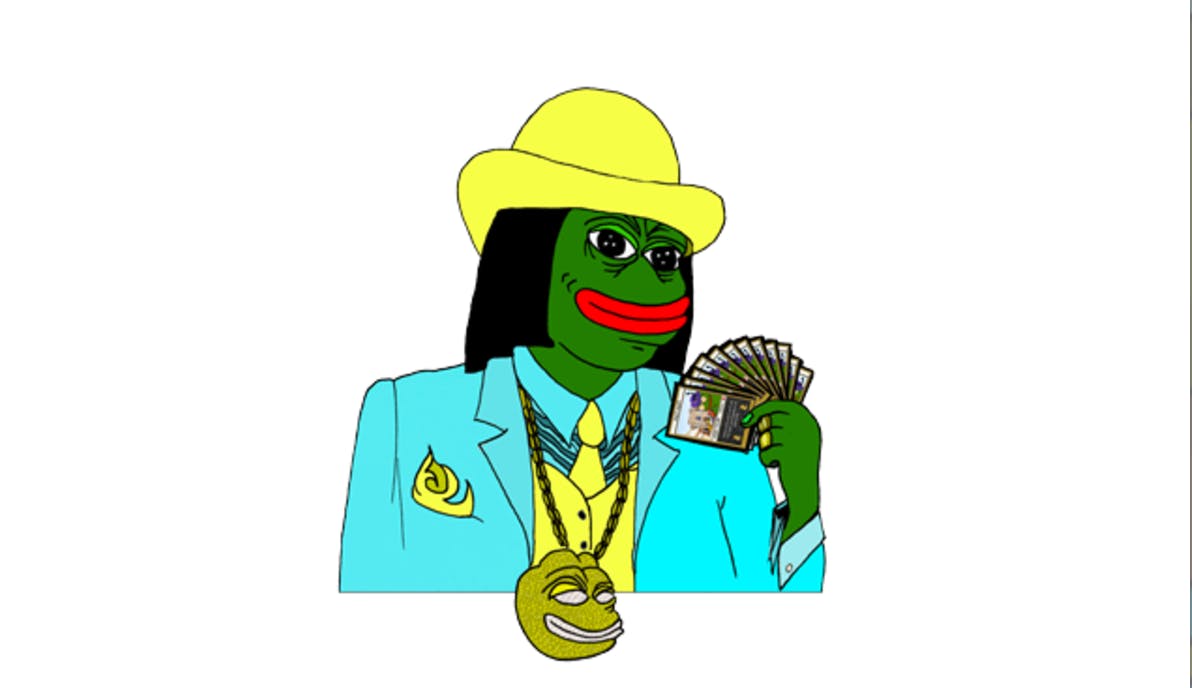 A blockchain-based platform called Counterparty lets users make anything into a unique digital token, and “anything” now includes Rare Pepes.

On the Pepe trading hub RarePepeWallet.com, you’ll find hundreds of Rare Pepe images, all formatted to look like trading cards. Each exists in a limited quantity, anywhere from one to thousands, and no new copies will ever be issued.

Traders can buy and sell the Pepes using Counterparty currency, but they prefer a cryptocurrency called PepeCash, which currently trades at 302 PepeCash to the dollar.

The selection of Pepes for sale, as JeffTheDunker points out, is a little weird right now: Because the site was created by crytocurrency nerds, many of the Pepe trading cards for sale there are Bitcoin-themed. There’s one called “Shitcoin Pepe,” and one named after mysterious Bitcoin creator Satoshi Nakamoto. 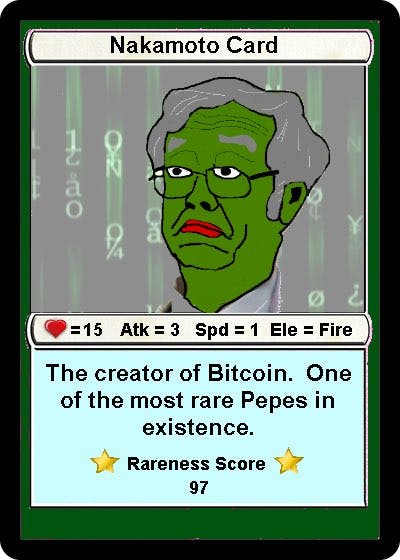 These aren’t necessarily the Pepes that posters on 4chan and Reddit would consider “dank” (most Pepes aren’t presented in card form, after all) but their rarity makes them a commodity. A one-of-a-kind card called “OnlyOnePepe” is currently on sale for the PepeCash equivalent of $11,589. Meanwhile, the “Top Cuck” Pepe, with 10,000 copies in circulation, can be yours for less than a dollar. 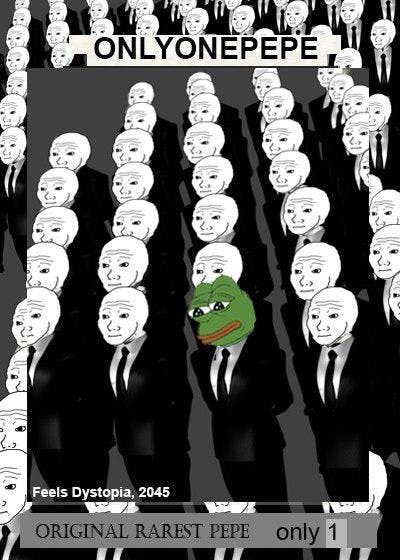 The universe of Rare Pepes is constantly expanding, too. There are already more than 500 distinct cards, and collectors can submit their own original Rare Pepes for consideration. All it takes is a payment of 4,000 PepeCash (roughly $13), a dank idea, and some design skills.

The rules for approval are stringent:

Submissions must be ORIGINAL.  Our rareness quality team examines each Pepe for rareness. (no stealing!)  Our experts understand that lots of Pepe’s borrow  from each other to an extent, but try to add as much Original content as possible.   Also make sure your Pepe is dank.  Check latest submissions on the directory to compare.

This manual approval process means none of the 1,200 compromised Pepes from the 2015 “Peppening” is likely to show up on the site. Some of them may still be dank, but they’re no longer rare.

One thing you’ll notice about the selection of Pepe cards—and the Rare Pepe trading community at large—is that they don’t carry even a whiff of Pepe’s status as an alt-right, white supremacist, pro-Donald-Trump icon.

“Most of the community don’t think Pepe is an alt-right thing. Some (like me) think that we should Make Pepe Great Again and free him of that connotation,” Pepe trading enthusiast Django Bates told the Daily Dot via email. “Also, you have to be aware that Pepe as a symbol of hate and racism by alt-rights is a merely North American thing. The rest of the world does not see Pepe in that context. But our Rare Pepe trading community is global. We have people from Japan, Spain, France, the U.S., Switzerland (myself), Russia, Turkey, South Africa and many other countries.

“Pepe is a meme. If alt-right idiots use it for there bullshit, then be it. Pepe is much greater and does not care about them. Pepe is a mirror. And a mirror is not racist, just because a racist is using it.”

So, instead of Trumpist Pepes, you’ll find card designs like My Little Pepe, which might be the most expensive Rare Pepe ever sold. It recently changed hands for 1 million PepeCash (currently about $3,300). 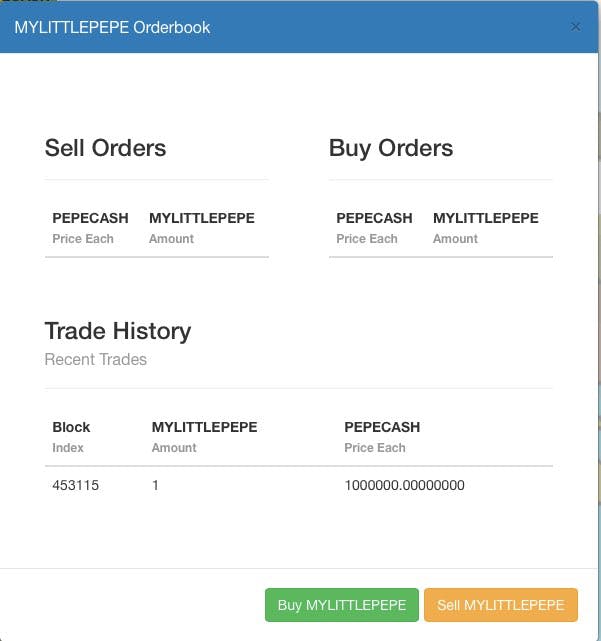 The proud owner of My Little Pepe, alias American Pegasus, told the Daily Dot, “Only one of these exist, and it belongs to a tier of the rarest pepes of all—uniques with only a single card issued.” 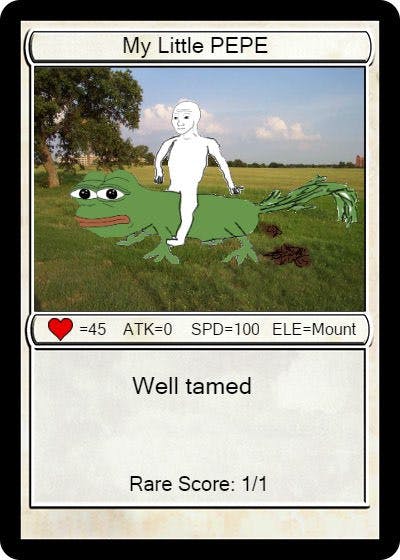 “But that Pepe wasn’t listed for sale in Counterparty,” American Pegasus continued. “Instead the seller only would accept cold hard PepeCash. A million of them to be exact. And so I’m darn glad I had some handy, and was able to score the trade.”

We’re a long way from Good Boy Points now. The Rare Pepe economy is based on real money, and PepeCash is starting to take off. A recent price jump seems to have been triggered by a January Vice article and an article Wednesday in France’s Le Monde that introduced Rare Pepe Wallets to a new group of meme fanatics.

Unlike most other digital currencies, this one is tied to the enthusiasm for an underlying product: Pepes. Even though you don’t need PepeCash to buy Pepes, Pepe enthusiasts find it nice to own for a number of reasons.

“PepeCash offers a fun and abstract way to value Rare Pepes apart from their underlying Counterparty value,” American Pegasus explained. “As we know, with money, the value is in the utility. There are several exciting PepeCash-only features being planned, such as an entire exchange based off PepeCash and a Pepestarter crowdfunding platform. Ultimately it’s best for the Pepeverse to have a highly liquid asset like this that can act as a base token for all things Pepe.”

No matter how much money you dump into Rare Pepes, though, you’ll never own them all. There are a handful of one-of-a-kind Pepes, and some of their owners may have lost the passphrases to their Pepe wallets or may never sell their precious rares.

Regardless of how formal and secure the Rare Pepe Economy gets, though, it wouldn’t be Pepe without a little trolling. Cryptocurrency blog Bitcoinist calls Rare Pepe Wallet “a satirical indictment of the altcoin markets,” especially the novelty digital currencies that are either jokes or shabby get-rich-quick schemes. Remember Dogecoin, the currency named after a Shiba Inu dog meme?

“In what can be seen as a satirical jab at this growing [altcoin] culture, Rare Pepes create a metaphorical representation of the pump and dump absurdity and legitimizes it through the use of the Bitcoin blockchain’s immutability,” Bitcoinist’s Ryan Strauss wrote in November.

The people trading Rare Pepes and PepeCash don’t see them as just another flash-in-the-pan alternative currency, though.

PEPE is going to be the next DOGE, only bigger. DOGE was just a shitcoin clone, PEPE is a counterparty asset that can literally rarify memes

Dogecoin, for example, was just a rebranded Bitcoin running on the same technology. PepeCash is different because of its connection to the Rare Pepe cards themselves, which are fun to collect and desirable to meme aficionados on their own terms.

“I deeply believe that it is a lot more interesting as Dogecoin, which was only a currency,” Bates told the Daily Dot. “This is not just a currency. It is Blockchain driven meme assets you really can own. It is also helping to develop Counterparty, the protocol that is used to create and trade these assets.”

On the Rare Pepe Traders group chat, there’s plenty of excitement about the PepeCash boom, but it’s also clear that the traders and card creators have a passion for the meme.

“With pepetrading there are several things coming together as an extra: Memepower, Curiosity, Human nature of collecting all sorts of stuff, Hope for profit, Community, Interest in Blockchain Technology and above all – the lust to make fun about everything and everybody,” Bates wrote. “It’s the mix of it all.”

One Rare Pepe designer, Nymity Nymz, told Le Monde, “I think these are just the beginnings of an industry,” and said it’s even possible he could live on his Pepes someday.

Nymz, who described himself to RarePepeNews.com as a “Rapper, Ghost writer, FinTech Guru,” also told the site that the reason he creates Rare Pepes is “for 2020.”

A Rare Pepe, he said, “is something that has the potential to outlive us all.”