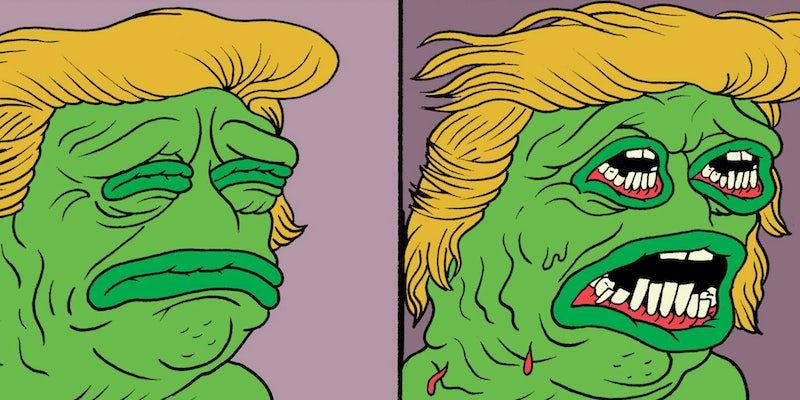 This is a mirror to the 2016 election, and it's terrifying.

Comic artist Matt Furie has been working through the five stages of grief ever since his beloved Pepe the Frog was co-opted by the alt-right, and he captured the process in a brutal new comic.

First came denial. Speaking to the Daily Dot in mid-September, Furie, who created Pepe for his Boy’s Club comic in 2005, was convinced that the frog’s adoption by Trump supporters was “just a phase.” “[I]t’s not the first time Pepe has been reclaimed for evil, and no one will care about it come November,” he said. “I predict that his sly, lovable, and charming status will be intact as early as next week.”

If anything, Pepe’s only become more entrenched with the “Deplorables” since then. Two weeks after Furie’s comments, the Anti-Defamation League listed Pepe the Frog as a hate symbol.

Then came anger and bargaining. Furie wrote an op-ed in Time where he tried to shift the conversation. “It’s a nightmare, and the only thing I can do is see this as an opportunity to speak out against hate,” he wrote.

The problem with Pepe is that he’s been stamped a hate symbol by politicians, hate groups, institutions, the media and, because of them, your mom. Before he got wrapped up in politics, Pepe was an inside-joke and a symbol for feeling sad or feeling good and many things in between. I understand that it’s out of my control, but in the end, Pepe is whatever you say he is, and I, the creator, say that Pepe is love.

It’s hard to say where Furie is in the process now, but his new 18-panel comic for the Nib perfectly captures Pepe’s descent into the madness of the alt-right and the 2016 election.

Titled with a reference to Hamlet, “Pepe the Frog: To Sleep, Perchance to Meme,” the comic speaks volumes about the lifespan of a meme in 2016, where even the most seemingly innocent images (or people) get caught in a downward spiral, until all the light and joy slowly fades to black.

It’s a mirror to our collective reality—and it’s terrifying.

View the full comic on the Nib.