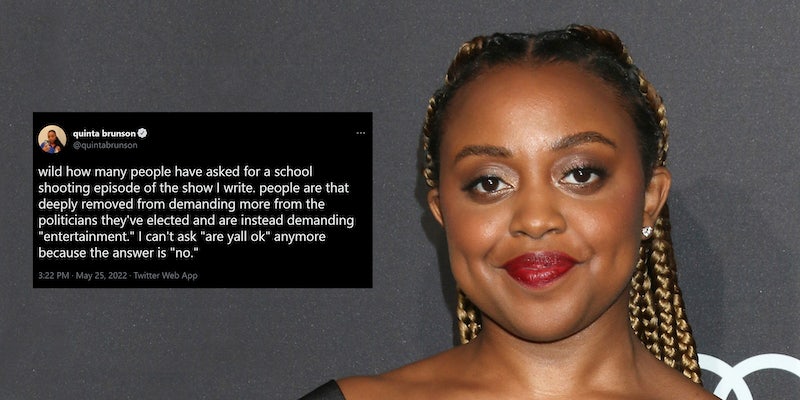 'this country is rotting our brains. im sad about it.'

“wild how many people have asked for a school shooting episode of the show I write,” tweeted Abbott Elementary creator Quinta Brunson on Wednesday. “people are that deeply removed from demanding more from the politicians they’ve elected and are instead demanding ‘entertainment.’ I can’t ask ‘are yall ok’ anymore because the answer is ‘no.'”

In the wake of this week’s devastating shooting in Uvalde, many of Brunson’s followers were shocked by this revelation. Abbott Elementary is a sweet, low-stakes sitcom about daily life in an elementary school, and it’s hard to understand why any viewer would want to introduce violence and trauma to the show.

But as Brunson continued to explain on Twitter, she’s received this disturbing request multiple times. “please use that energy to ask your elected official to get on Beto time and nothing less,” she wrote, referring to Beto O’Rourke confronting Texas Gov. Greg Abbott over his opposition to gun control.

It speaks to the widespread sense of helplessness that people are turning to a sitcom for guidance. Most of the people replying to Brunson’s thread are appalled, expressing shock at the idea of injecting such a dark topic into the show. Abbott Elementary is warm and comedic in tone, and Brunson has mentioned that the kids playing her students treat filming the show like attending a real school. So in addition to the fact that most viewers would likely be upset by a school shooting episode, the filming process could easily be traumatic for the child actors involved.

Surprisingly though, some of Brunson’s followers did continue to argue in favor of a school shooting episode, despite Brunson’s direct requests to stop. There appears to be a small contingent of viewers who believe the show could help to “heal” the national trauma of school shootings, or encourage political change by exploring the issue on-screen.

Obviously there’s a long history of sitcoms tackling social issues in “very special episodes,” but there’s a big difference between a PG-rated exploration of racism or drug addiction, and depicting mass-murder in a realistic and potentially triggering context. In recent years, a lot of emphasis has been placed on pop-culture representation as a form of activism. But representing something onscreen isn’t always a constructive statement. If politicians aren’t moved to enact gun control measures after seeing real children die, a fictional TV show is probably not going to make any difference.