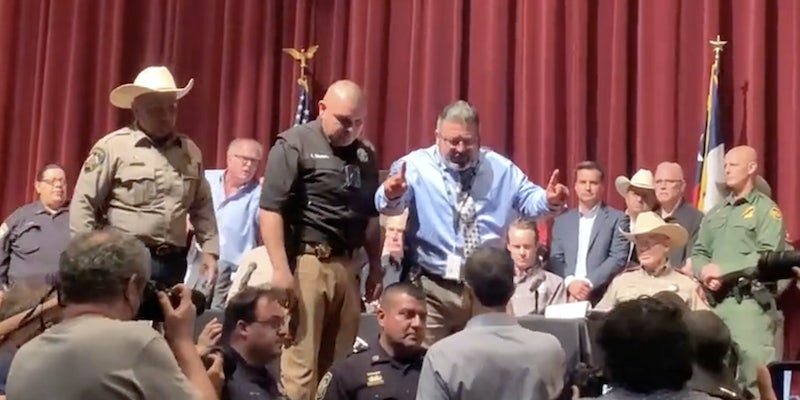 ‘This is on you’: Beto O’Rourke confronts Greg Abbott over Uvalde shooting

'This will continue to happen. Somebody needs to stand up for the children of this state," O'Rourke said.

“You are doing nothing,” O’Rourke said, confronting the governor from the crowd. “You said this is unpredictable, and this is totally predictable.”

O’Rourke is running against Abbott in Texas’ upcoming governor’s race this November.

O’Rourke was escorted out of the press conference but brought up the 2019 shooting at an El Paso, Texas Walmart during his brief speech. The El Paso shooting is regarded as the largest attack on Latinos in modern American history and left 23 dead and 23 wounded.

“This is on you until you choose to do something different,” he said as he was escorted away by security. “This will continue to happen. Somebody needs to stand up for the children of this state, or they will continue to be killed, just as they were in Uvalde yesterday.”

The mayor of Uvalde, Don McLaughlin, repeatedly told O’Rourke he was “out of line” and a “sick son of a bitch.”

After O’Rourke was escorted out, Abbott reiterated that Texans should not make the shooting a political issue. Many have criticized Texas’ loose gun laws in the wake of the Uvalde shooting on Tuesday, where a teenager who purchased an AR-15 online killed 19 children and two teachers in an elementary school. The shooting comes less than two weeks after a shooting in Buffalo, New York where ten people were killed and three were injured.

“It’s disgusting to hear this group,” wrote another, referring to Abbott’s press conference. “These families also need our rage and our vote to make this stop.  Beto just had to deal with this in his own community and he’s had enough.”