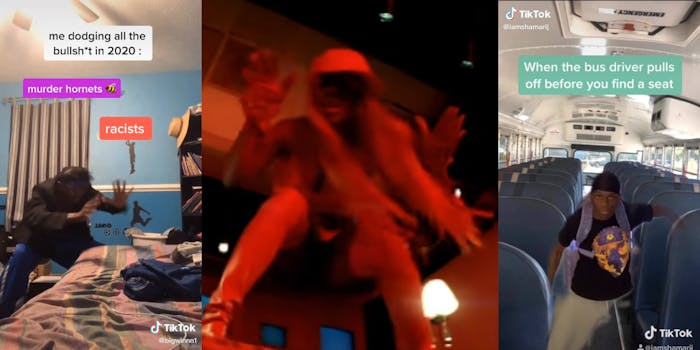 Lil' Kim's dance from the Mobb Deep video is helping people dodge the horrors of 2020.

Mobb Deep’s 1999 video for “Quiet Storm” is very much a product of the era, though the song continued to be influential well after its release. But one part of the remix video—Lil’ Kim’s dance moves during her verse—has made its way to TikTok.

The “Quiet Storm” dance didn’t just appear on TikTok; it’s been kept alive throughout the years. As Know Your Meme points out, in 2017 (the same year Mobb Deep’s Prodigy passed away), a video with the caption “Practicing your best Lil’ Kim ‘Quiet Storm’ dance moves before the party” was posted to Twitter, and in October 2019, Lil’ Kim brought it back during a BET Hip Hop Awards medley.

When it jumped to TikTok in late 2019, the dance—a series of staggered squats and dodgy arm movements—was fairly pure.

But more recently, it has evolved to fit comedic or relatable situations. In early May, the “Quiet Storm” dance started seeing more variations, using the audio from @thavideoplug.

There’s even a murder hornet sub-trend.

If anything, it’s allowing people to dodge whatever else 2020 has in store. Between this and the “Crush on You” challenge, Lil’ Kim doesn’t need to even get on TikTok (but she probably should).