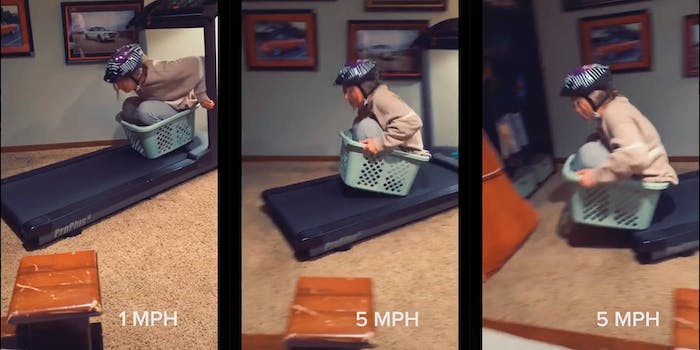 People are using treadmills to recreate Mario Kart on TikTok

At least treadmills are getting some use during lockdown.

Sure, you could play Mario Kart while in isolation. Or you could stuff yourself into a storage bin and turn on the treadmill.

One TikTok user, Jesse Ring, has apparently kept herself occupied by recreating the race part of Mario Kart. Clad in a biking helmet and sitting snugly in a laundry basket, Ring attempts 1-7 miles per hour on the treadmill, with the last few attempts throwing a little more chaos into the experiment. It’s all about the forward momentum.

The clip is less than a week old and has more than 16 million views (and it appears to be Ring’s only video), but it inspired others to try it for themselves. Some intrepid players went up to 8mph. But it seems like they need more runway than a treadmill offers. Maybe a treadmill onto a Slip ‘N Slide?

This is part of a bigger #mariokartchallenge trend, which, in the last couple of months, has evolved to include a treadmill drinking game.

And there have been other interesting recreations of the game.

So yeah, this totally counts as cardio. And then there’s the next level iteration.