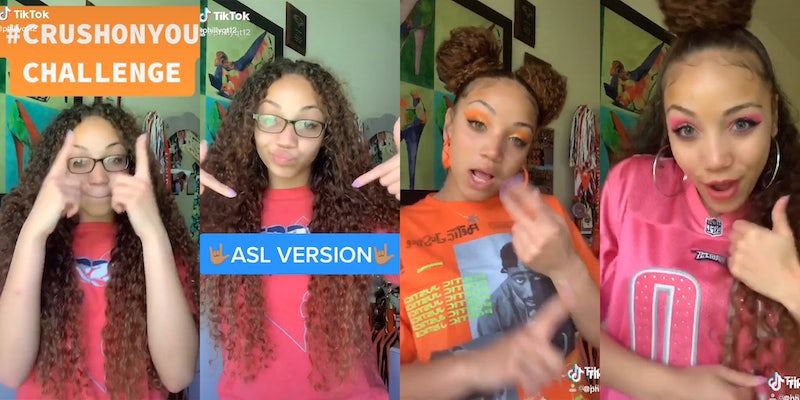 Teen goes viral for ASL take on ‘Crush on You’ challenge

The 17-year-old got the attention of Lil' Kim, too.

The “Crush on You” challenge, set to Lil’ Kim’s hit 1997 single of the same name, has been circulating on TikTok for the last month. The format of this specific challenge involves cycling through looks in four different colors to mark Lil’ Kim’s verses, but Philly teen Justina Miles put her own spin on it with an ASL version.

The challenge was created by @thefacebully on April 11, and the hashtag has more than 3 million views, but Miles’ version stood out to a lot of people, especially on Twitter, where it started going viral last week. The 17-year-old, who is not completely deaf but hard of hearing, told Philly news site Billy Penn she started getting calls and texts from friends last weekend, saying she was blowing up on Twitter (which Miles just joined this month).

Model and actor Nyle DiMarco posted the clip to Instagram and stated “I’m mesmerized by her sign language and how she eloquently flows our language… on beat!!” He also tagged Lil’ Kim, who posted the clip to her Instagram stories earlier this week. Miles, who attends school in D.C., told Billy Penn: “I was screaming.”

Last fall, creator Chrissy Marshall went viral for a post in which she expressed excitement that people had signed to her in ASL as she ran errands, and encouraged others to learn it as well. The ASL hashtag has more than 1 billion views on TikTok.

Update 12:51pm CT, May 8: Miles tells the Daily Dot she was surprised at the reaction her video got, and that others in the deaf community reached out to her. She says a collaboration with SLNTWRLD, who does ASL versions of rap songs, might be happening too: “I honestly was just having fun in my room. The idea was suggested by others in the comments section of the creator of the challenge. It’s really nice to see a female, especially deaf, especially black, blow up.”