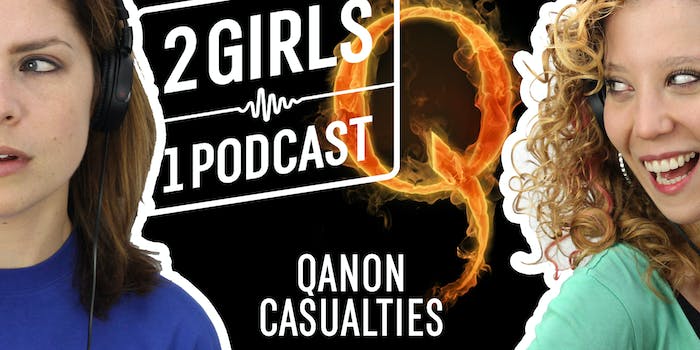 QAnon Casualties: How to save a loved one from conspiracy cults

The rabbit hole is deeper than you can imagine.

The internet empowers everyone to find a like-minded community online. It also facilitates spreading misinformation and conspiracy thinking at breakneck speeds. QAnon, the belief that government insiders have foretold the Biblical cleansing of liberals, has morphed from a handful of conspiracy theories on 8chan to a full-blown cult that is tearing families apart.

In response, the internet has birthed support groups like r/QAnonCasualties, where people can share their stories and get advice on how to help family members obsessed with Q. It also contains the cautionary tales of former Q believers who found a way out.

In this special four-part episode of 2 GIRLS 1 PODCAST, Alli and Jen learn about the QAnon phenomenon and what people can do to help loved ones unplug and escape from cult behavior.