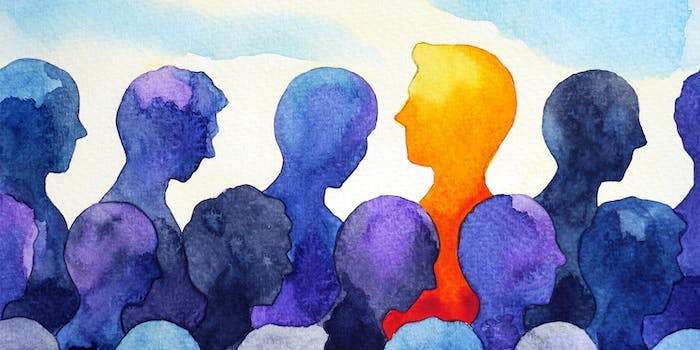 The conspiracy can tear families apart.

The conspiracy theory that President Donald Trump is leading a secret (yet public) fight to take down the deep state and its hordes of pedophiles has had ups-and-downs in the last year, from losing its home on 8chan to a glut of mainstream coverage thanks to the coronavirus pandemic and several high-profile believers making the news.

Through it all, there have still been no mass arrests or great sweeping up of Satanic cabalists. Even so, QAnon believers have kept the faith—and in the process, many have destroyed their relationships with the “normie” loved ones who aren’t taken in by the movement.

There are now so many people who have lost someone they care about to the Tom Clancy-meets-Dan Brown militia fantasy of QAnon that they’ve formed their own community on Reddit: r/QAnonCasualties.

And their stories are heartbreaking tales of husbands and wives who no longer speak, destroyed friendships, siblings who chose QAnon over their family, parents who don’t speak to their children anymore. There’s is the misery of people who have had their loved ones taken in by a joyless, violent cult that promises “pain” to the enemies of freedom, but, in reality, only delivers it to the people who love those ones who believe in it.

R/QAnonCasualties was created in July by Reddit user Squawkomodile, who introduced the sub with a long post about their relationship with their mother was decaying as she sank deeper and deeper into QAnon.

“My mom has been into QAnon since it got started,” the first post begins. “The ignorance, bigotry, and refusal to question “the plan” have only gotten worse over time. I’m always torn between stopping communication with her because it only seems to make me feel terrible, and feeling like it’s my responsibility to try to lead her back to reality. We barely talk anymore, but when we did, she used nearly every conversation as an ‘in’ to bring up Q.”

“Having a loved one involved in QAnon is an exhausting, sad, scary, demoralizing experience,” it continues. “Most people are happy to just point and laugh at QAnon followers because they aren’t directly affected by it. If you don’t have that luxury, this sub is for you.”

The sub has only a few thousand subscribers. But the vast majority of posts are by someone who says they are losing a person they care about to QAnon and don’t have anywhere in the “real world” to turn.

Other posts ask for advice on how to de-radicalize people from Q, how to debate it with a believer, and how to recover from cult membership in general.

Daily Dot reached out to posters on r/QAnonCasualties, as well as another anti-Q sub, r/QultHeadquarters, for more details about their experiences seeing loved ones become involved with QAnon.

Several responded, on condition of their names not being used for fear of their conspiracy-believing family members finding out.

It should be noted that as per most of Reddit, the stories told by r/QAnonCasualties members are anonymous, and therefore difficult to be vetted. But in general, they line up with similar stories told to the Daily Dot and other media outlets. They reveal QAnon as a conspiracy theory that sucks in believers through fantastic promises of great change, secret knowledge of a hidden war between good and evil, suppressed cures for diseases and free energy, and a feeling of community between people who know that the order of things is forever almost going to be violently overturned.

One woman told the Daily Dot she didn’t have “a whole lot of hope” in regards to getting her brother-in-law “back” from QAnon after he demanded she watch a 10-part video series on the conspiracy theory.

Another Q casualty told Daily Dot that she’d been with her husband for 20 years and never had any severe problems in their relationship “until he found Q.”

“He’s always been conspiracy minded,” the woman told Daily Dot. “[But] with Q though, he got sucked in and sucked deep and it has truly taken over his life. He spends hours every day on Twitter and watching YouTube channels, and it colors everything that he does. If he wasn’t still very successful with his business, I honestly would be concerned about a brain tumor, it’s that much of a change.”

And another told Daily Dot they have “extended family members who are convinced COVID-19 is simultaneously a hoax and a plot by Bill Gates and caused by 5G,” referring to multiple conspiracy theories about coronavirus that are extremely popular in QAnon circles.

Still, not every story told by a member of r/QAnonCasualties is a tragic one of a family member being lost.

Some people are actually able to pull themselves out of Q through logic and reasoning—a rare event that gives hope that one day the entire conspiracy theory might be left behind by those who believe it. One self-described liberal voter was drawn to Q by a sense that the Democratic Party had lost its way, and that the media wasn’t telling the whole truth about the misdeeds of the wealthy and powerful.

“When I found Q, I was initially very skeptical about the idea of Trump being a [good guy] but since no one else was even willing to acknowledge those issues, they had my attention,” they said.

As Q continued to spin their story of the “silent war” between good and evil, this person was more and more drawn in. “I could now envision a reality where [Trump] was given an opportunity to sell out his partners in crime and go down as a hero.” But eventually, this believer turned on the movement, telling the Daily Dot that they could see the cultish tactics Q uses to keep followers around, such as promising a great event to come, and shaming those who begin to ask questions about the conspiracy theory.

“I noticed Q’s narrative become very lazy [and started to] cater to the hateful crowd that was still holding on,” they said. “I became ashamed that I ever bought any of it at all.”

“I know several Q followers, including my boyfriend and several members of his family, and I’ve seen how bizarre and destructive it is,” one of the other sub moderators told Daily Dot. “I wanted to maintain r/qanoncasualties as a safe space for people affected by Q followers to tell their stories and receive support.”

In that spirit, the sub is heavily moderated to remove conspiracy-promoting, trolling, or pro-Q posts, making it one of the rare truly safe spaces on Reddit to open up about conspiracy theories without relentless harassment.

Given the viral popularity of the recent QAnon-themed YouTube video “Out of Shadows,” and the continuing crush of QAnon-approved coronavirus conspiracy theories and quack cures, it’s likely that the conspiracy theory will continue to perpetuate.

As long as it does, it will continue to both suck people in, and repel the loved ones of those it grabs.

Reddit fora like r/QAnonCasualties might be small, but for those dealing with the influence of the conspiracy theory, it will continue to serve as one of the only places to vent to people going through the same thing.