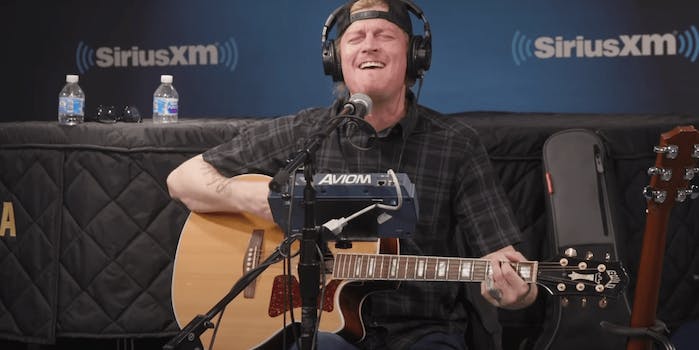 Puddle of Mudd gets roasted for abysmal Nirvana cover

'The defining sound of the pandemic.'

Lest the members of Trapt get too much press for lead singer Chris Taylor Brown’s pro-Trump Twitter rants, Puddle of Mudd frontman Wes Scantlin stole headlines this week with an abominable cover of Nirvana’s “About a Girl.”

The post-grunge rockers—whose 2001 debut album, Come Clean, went triple platinum—covered the Nirvana classic in January for a SiriusXM performance, but it just recently started to gather momentum online. Scantlin’s twangy, raspy howl showed an obvious deference to Kurt Cobain on Puddle of Mudd hits such as “Blurry” and “She Hates Me,” and technically, those elements are both on display in his SiriusXM performance as well. But Scantlin’s performance also lacks several crucial elements, such as melody and key. The singer contorts his face into a grimace as he shouts and moans his way through the song, struggling to hit Cobain’s high notes—or any notes at all.

The original YouTube video of the performance has earned more than 1.1 million views. It is currently unlisted, so you can’t find it via YouTube search, but it still exists in all its cringeworthy glory for the time being. The like-to-dislike ratio—2,600 to 17,000—speaks volumes.

Viewers swiftly roasted Scantlin—who is the only original member of Puddle of Mudd—once the video began picking up steam online. One Twitter user made a video edit of Nirvana covering Puddle of Mudd covering Nirvana. Another user dubbed the performance “the defining sound of the 2020 pandemic,” which somehow manages to sell the coronavirus short.

Recent years have not been kind to Scantlin. The singer was arrested twice for DUI in 2015, and in 2016 his bandmates abandoned him onstage in Doncaster, England as he performed “Blurry” while sitting shirtless in a chair. Scantlin reportedly spent three months in solitary confinement and has been clean for a few years now, and last year, Puddle of Mudd released Welcome to Galvania, its first studio album in 10 years.

Scantlin seems to be doing better these days, atrocious Nirvana cover notwithstanding. Maybe the guy deserves a break from the social media lashing. Do the members of Drowning Pool have anything they’d like to add?