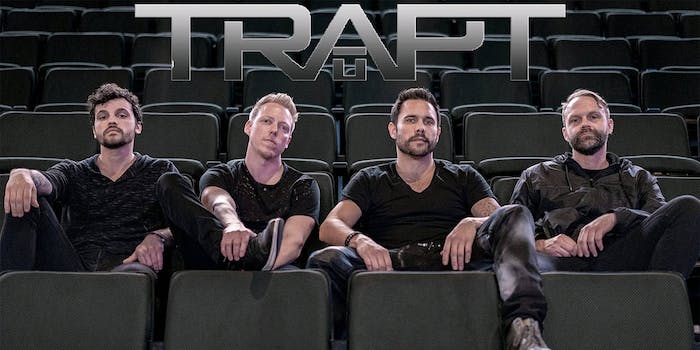 Still headstrong. Still taking on anyone.

Trapt frontman and noted MAGA chud Chris Taylor Brown has been making the most of his coronavirus quarantine by beefing with contemporary metal bands that are much more popular than his washed-up nu-metal outfit. The infinitely compelling saga received a new chapter with the genesis of the @TRAAPTOFFIClAL parody account, which Brown is now threatening to sue.

Brown’s Twitter meltdown began in mid-March when he went on a racist, xenophobic rant in defense of President Donald Trump’s response to the coronavirus, feuding with celebrities and journalists who called him out. The tantrum escalated into an all-out war with prominent members of metal Twitter, including Power Trip’s Riley Gale and Trivium’s Paolo Gregoletto. Now, people are taking every opportunity to roast the “Headstrong” band for being woefully out of touch with modern music trends (and for sucking).

Cue @TRAAPTOFFIClAL, which emerged on Twitter last Sunday with an elegant, three-word tweet optimized for virality: “we plagiarized headstrong.”

Since then, the account owner has rhapsodized about the musical genius of “Headstrong,” reminisced about the Bush era, and talked a disconcerting amount about pooping their pants.

Brown soon caught wind of the @TRAAPTOFFIClAL account, which, at the time, was operating with the handle @TRAPTOFFIClAL, subbing a lowercase “L” for the second “I” in “official” to pass off as the real band account. In true “Headstrong” fashion, Brown went up to bat against the parodists, threatening legal action. But the mock account would not be cowed, invoking the First Amendment and Trapt’s own lyrics in its responses to Brown.

Since their initial scuffle, the @TRAAPTOFFIClAL account has added (and deleted, and re-added) an extra “A” to its handle and updated its bio with a disclaimer, just in case Brown’s legal threats hold some credence. But that hasn’t stopped the account from annihilating Trapt, sharing videos of people bailing on a recent set and retweeting some of Brown’s more ludicrous posts (like threatening to subpoena another Twitter user for making fun of them).

Yesterday, the owner of @TRAAPTOFFIClAL decided they’d had enough and would retaliate against Trapt with legal action of their own.

Under normal circumstances, one could write this off as an April Fool’s joke. But nothing about this Twitter beef is normal (and honestly, it’s getting difficult to tell whether any of it is funny or all just immensely sad). Brown might have just thrown in the towel, however, if the screenshot @TRAAPTOFFIClAL shared is to be trusted.

Blocked or not, we can almost certainly expect to hear more from Trapt and @TRAAPTOFFIClAL independently in the coming days. Brown all but guaranteed it.