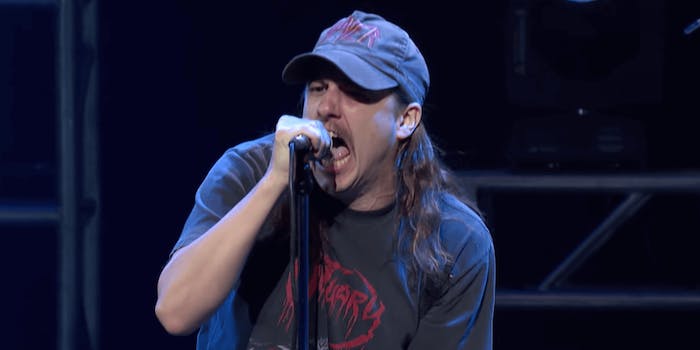 Power Trip frontman Riley Gale is, in fact, headstrong to take on anyone.

You either die a nu-metal one-hit wonder, or live long enough to see yourself become a washed-up MAGA chud.

Early-2000s agro-rockers Trapt are currently on the tail end of that devolution. The “Headstrong” authors are no strangers to social media controversy, loudly expressing pro-Trump sentiments and beefing with any celebrity, journalist, or fellow musician who wades into their line of fire. For example, here’s their pinned tweet:

As they stagger to the end of a weeklong Twitter bender, feet firmly in mouths, the members of Trapt have found themselves a formidable new opponent: Riley Gale, singer of crossover thrash band Power Trip.

After ostensibly growing tired of seeing Trapt deny the existence of white privilege and blame systemic oppression on “victim mentality,” Gale issued a challenge to the band:

Trapt—whose biggest hit, mind you, contains the words “Back off, I’ll take you on, Headstrong to take on anyone”—deflected the challenge by responding, “You don’t sell tickets to anything…” They dared Gale to share a crowd shot of a recent Power Trip show, which seems like an obviously terrible and easily avoidable trap (no pun intended). Nevertheless, Gale obliged, posting photos of Power Trip’s 2019 set at Download Festival before tens of thousands of people, versus a recent Trapt performance at a mostly empty amphitheater.

At this point, anybody with a modicum of common sense would log off. But this is Trapt—the band behind universally acclaimed master blaster “Headstrong”!—we’re talking about. The group continued hastening its own demise, telling Gale his very successful band was “never going to do anything ever” and calling the singer a “Bernie bitch.” Never mind the fact that Power Trip regularly sells out 1,000-capacity rooms while Trapt hits the suburban bar n’ grill circuit with, like, Puddle of Mudd and 18 other bands.

By this point, plenty of Power Trip fans and fellow musicians had chimed in to roast Trapt, finding the low-hanging fruit irresistible. People uploaded more photos of empty gigs; Twitter user @trumpstoaddick apparently called the band’s manager, David Mabry, to discuss the beef. “I’ve had that conversation with him many, many times, and he listens to what he wants to listen to. I said, ‘Dude, all you’re doing is shooting yourself in the foot,'” Mabry replied.

Gale eventually extended an olive branch to Trapt—in exchange for some sweet merch.

The Power Trip frontman also used the beef as an opportunity to share some music industry insight, dishing on purchased streams and followers used to boost an artist’s online profile, but which do nothing to help their in-person draw.

Trapt served their last volley in this Twitter war eight hours ago. As of this morning, Gale is still responding to fans embroiled in the beef and imploring Spotify to pay artists better and stop profiting off inflated streams, proving to the whole world that he is, in fact, headstrong to take on anyone.