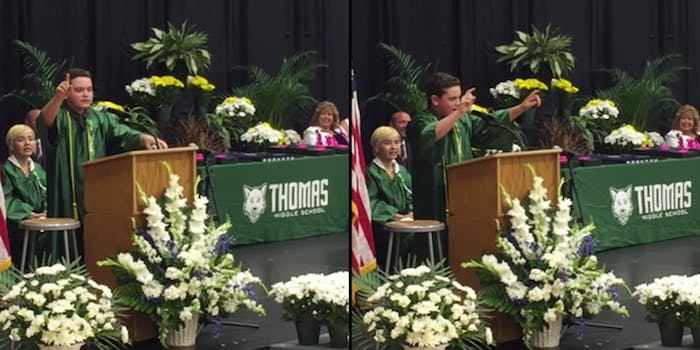 He even nails Trump's hand gestures.

The graduation from middle school to high school is a big deal. It’s one more step closer to adulthood. And one eighth grader has made the transition much more memorable.

Meet Jack Aiello. Bestowed with the honor of a giving graduation speech for Thomas Middle School, the future freshman had a little fun by mixing up the address with his love for politics. Over the span of eight minutes, Jack impersonated Donald Trump, Ted Cruz, President Obama, Hillary Clinton, and Bernie Sanders.

He cracked jokes at the teachers’ expense and reminisced about some of his finer memories at Thomas Middle School, all through the voices and mannerisms of these politicians. Jack totally nails Trump’s weird hand movements and distracting asides, channels Cruz’s sluggish drawl, and more.

And if politics doesn’t work out, at least Jack can turn to comedy.