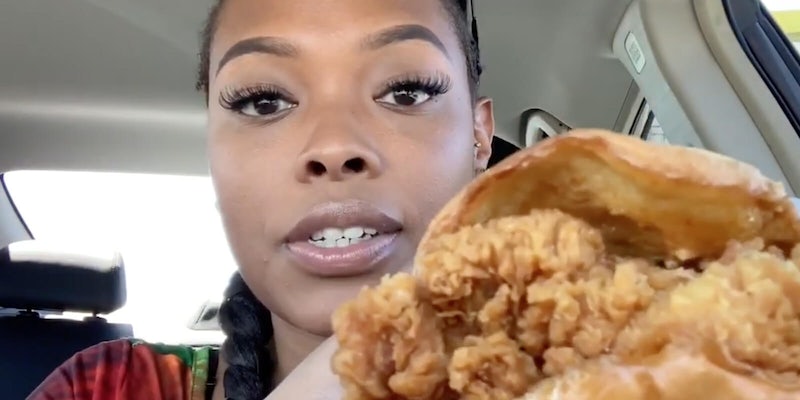 The New Orleans-born company has faced resentment, and memes, from the perceived treatment of its employees.

The backlash has come back around to Popeyes.

Following the overwhelming success of its new chicken sandwich, the New Orleans-born company has faced resentment from the perceived treatment of its employees. A short, harrowing video of an employee, sitting doubled over in exhaustion outside a store has made the rounds in memes and across social media.

A few emotions when I watch this video. So many people work so hard and are paid so little. This sister just looks tired. pic.twitter.com/xFnOgmNLO6

Once the video hit, some realities for service workers and the state of the American economy came to the fore.

“They’ve been on their feet all day. Have to deal with non-stop orders,” user @RVAReid tweeted.

I know them Popeyes workers had a week from hell.

Many have recommended Popeyes provide additional bonuses or raises for the employees who worked during the chicken sandwich rollout.

Popeyes needs to be giving all their employees a raise and a bonus for dealing with the craziness.

Black Twitter helped Popeyes make $23 million. I wonder if they will give their employees a bonus, vacation, raise..something or did we just help the CEO buy another yacht ?

Some also accused Popeyes of not being prepared for the demand.

It’s really dehumanizing. And the company in no way prepared their stores & franchisees for the demand. When I went the staff was clearly blindsided. And customers were not being understanding.

Popeyes had the most successful rollout of a food item since Dairy Queen dropped the Blizzard and only like 6 people are gonna get paid off of it while the workers are now trying to survive Thunderdome.

In perhaps-related news, an employee at a Gainesville, Florida-area Popeyes was hospitalized Tuesday after apparently falling onto a greasy floor.

“The Popeyes in Gainesville, Florida just shut down because the manager got overwhelmed with the sammich orders and collapsed in some grease” https://t.co/66119pCl8g

Even with all of this, there have been some entertaining takes on the Popeyes explosion, putting the employees in a contrasting, hilarious light.