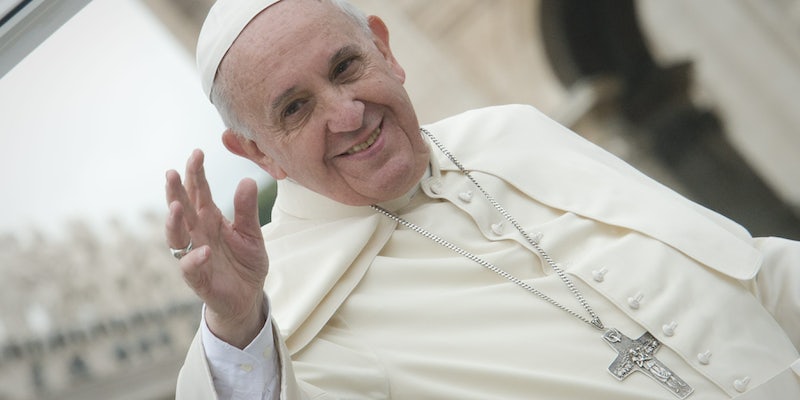 Pope Francis definitely is a pope for millennials—what with his bold stance on issues ranging from climate change to homosexuality to the gender pay gap.

On Saturday though, his millennial outreach hit a peak when he tweeted that the Virgin Mary was the first ever—and the ultimate—“influencer”, having been successful despite her lack of access to social media. He also said it while addressing a World Youth Day in Panama City that day.

With her “yes”, Mary became the most influential woman in history. Without social networks, she became the first “influencer”: the “influencer” of God. #Panama2019

Twitter has all sorts of feelings about it, but Atlantic reporter Taylor Lorenz landed the most viral clapback, writing that “Jesus literally faked his own death for more followers, so…”

OK but doesn’t it seem odd that she only posts selfies with her son as a baby? Where are the teen years? Where’s His first birdhouse as a carpenter’s apprentice? I’ll hang up and take my answer offline, thanks Padre

From some saying his social media team was trying too hard…

Firstly, don't try to be cool, person who manages the Pope's Twitter feed.
Secondly, Eve is way more influential than Mary. Disobedience and thinking for yourself, not motherhood, are the first calling of powerful and influential women.

…to some making it about consent (or a lack thereof):

Thirdly, great to see the Church focusing on the importance of consent (even if the Bible is actually woolly on whether Mary truly had a choice). How very #MeToo era of you. Keep it up.

So you are suggesting that Mary consented to carry god's child, but I thought she was unaware of it until she couldn't be unaware of it making it non-consensual.

It wasn't concensual of course. Gabriel didn't ask her; he told her: "thou shalt conceive in thy womb," … She did agree once it was announced but c'mon, young, uneducated Jewish woman against an angel. The power discrepancy was too great to allow for genuine consent.

And that conversion on consent swiftly veered toward the Catholic Church’s record of sexually abusing young boys:

I'm not sure consent was asked for. Seems to have become something of a policy for the Church.

Great outreach to The Youths here. Now do something about all the child rape maybe.

Some tested the accuracy of the tweet, claiming  it really was Eve who was the first influencer:

Not to be pedantic but wasn't Eve the first female "influencer" ?

I feel like I remember someone wrote about her in some book you might have forgotten about.

The irony that Mary, despite being the “influencer,” still wasn’t in a position of power wasn’t lost on many:

Maybe the tweet wasn’t a hit among his (Twitter) followers, but the pope stirred a social media conversation on a variety of hot-button social justice issues which, we can all agree, is a pretty millennial thing to do.