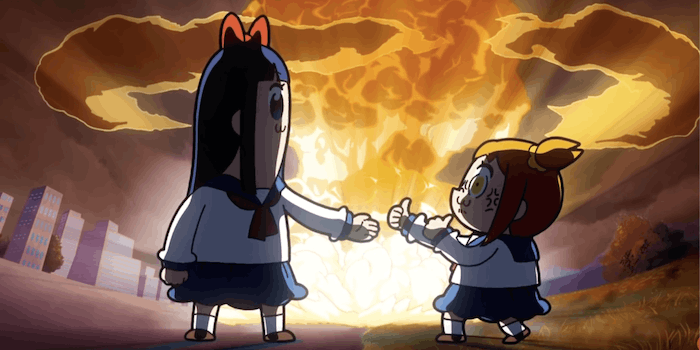 ‘Pop Team Epic’ is an anime for the meme generation

"Pop Team Epic" is being called 'the shitpost anime.'

Pop Team Epic, one of the most talked-about new anime series of 2018, is basically one huge, trollish meme-fest. The pop culture references are delivered at a manic pace, the plot doesn’t always make sense, and some commentators have even described it as “an anime based on the dankmemes subreddit.” It’s basically one long, animated shitpost—but it’s a brilliant shitpost, and people are already calling it the potential anime of the year.

So, what IS Pop Team Epic, and what does it have to do with dank memes?

Poptepipic, as Japanese fans call it, is based on a webcomic by a mysterious doujinshi artist—a self-published comics creator—who goes by the name Bkub Okawa. It stars two “average” teenage schoolgirls named Popuko and Pipimi who are actually anything but average. They speak in jarringly deep voices, and their comical, violent adventures have no clear plot.

Even Crunchyroll, the site where Poptepipic is streaming in the U.S., describes it as “weird” and “practically dadaism.” The service also points out that it’s “two girls blowing things up with their minds,” which is helpful. But truly, you have no hope of understanding Poptepipic until you watch it. And even watching it doesn’t help that much.

The first episode alone has an elaborate false opening that repeats itself multiple times, making the whole thing seem like one big glitch.

“Nothing is going to make sense in this anime. Everything in this anime is designed to troll you,” explained YouTuber Tokyosaurus in his video “POPTEPIPIC : THE DANKMEMES ANIME.”

And what about the memes? Well, here are just some of the many references to memes and pop culture in Pop Team Epic. They spoof other anime (Your Name and My Neighbor Totoro) and video games (Chrono Trigger, Pokemon, Skyrim) in almost every scene. You’re going to need a TVTropes page just to keep up:

The show (and the comic it’s based on) has already inspired a slew of weird memes. You may have seen the panel where Popuko gets “arrested for YouTube crimes” going around—the context isn’t important, it’s a great all-purpose reaction image whenever something awful goes down on YouTube.

An image of the girls throwing up the double middle fingers has also gone viral:

And perhaps the oldest Pop Team Epic meme is a panel from the comic of Popuko declaring, “Ah! You are motherfucker!” It was initially a response to someone correcting her pronunciation of “hamburger,” but the panel now stands alone as a response to… well, anything.

The best part about Pop Team Epic is that the show that’s being called “the dankmemes anime” or “the shitpost anime” is being referenced and recycled by the dank memers and shitposters themselves.

To be fair, you have to have a very high IQ to understand Pop Team Epic. The humour is extremely subtle, and without a solid grasp of animation history most of the jokes will go over a typical viewer’s head. There’s also Pipimi’s enraged outlook, which is deftly woven into her characterisation- her personal philosophy draws heavily from Narodnaya Volya literature, for instance. The fans understand this stuff; they have the intellectual capacity to truly appreciate the depths of these jokes, to realise that they’re not just funny- they say something deep about LIFE. As a consequence people who dislike Pop Team Epic truly ARE idiots- of course they wouldn’t appreciate, for instance, the humour in Popuko’s existential catchphrase “Are you motherfucker?” which itself is a cryptic reference to Turgenev’s Russian epic Fathers and Sons.

Because Popuko and Pipimi can be anything on their show, they adapt incredibly well to meme mashups.  For example, here’s Popuko as this year’s biggest (and worst) meme, Ugandan Knuckles:

As of this writing, the Poptepipic anime is only on episode 2 of its U.S. release, so we’ve really only reached the tip of the iceberg of memes that will eventually be created by, and about, the show.