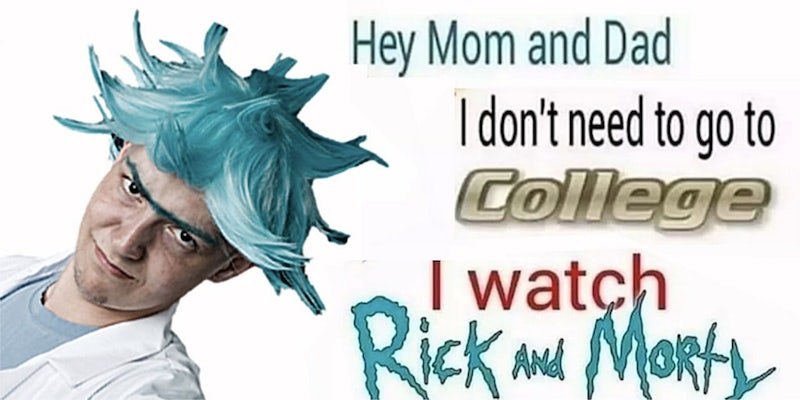 Who's smarter: a doctor, or a 'Rick and Morty' fan?

Rick and Morty is a bit more cerebral and nuanced than your typical animated comedy, but just because it focuses on a depressed genius doesn’t make it rocket science. For every sophisticated joke in the show, there’s a wacky non-sequitur like “wubba-lubba-dub-dub” or “I’m Pickle Rick!” But don’t point that out to the proudest fans of the show, who have something of a reputation for arrogance and self-congratulation.

A new meme lampoons the people who seem to think appreciating Rick and Morty makes them part of an exclusive intelligentsia. “To be fair,” it sarcastically points out, “you have to have a pretty high IQ to understand Rick and Morty.”

Here’s a popular example of the gag, snidely implying that Rick and Morty fans are the only intelligent life in the universe:

And this tweet joking that Rick and Morty fans are all fit for Ivy League admission has gone crazy viral:

The two posts have sparked a full-fledged meme, often seen on Reddit under the headline “To be fair…”  Here’s a small taste of what’s shaping up to be a huge trend:

You get the basic idea: aficionados of Rick and Morty, a popular television program enjoyed by millions, are intellectually superior to the rest of you subhumans.

The Rick and Morty backlash is reminiscent of the backlash against the Star Wars fans who assert that they are “nerds” or “geeks” on the basis of their enjoyment of one of the most popular movie franchises of all time. People are starting to realize what Big Bang Theory creator Chuck Lorre realized a long time ago: geeks, and people who want to be geeks, aren’t outsiders anymore. They’re a huge audience with a lot of spending power, and it pays to pander to them.

Is Rick and Morty better than Big Bang‘s lowest common denominator? Hell yeah, but just because it confronts difficult experiences like depression, alcoholism, the constraints of traditional masculinity, and broken family relationships doesn’t mean you have to be in MENSA to appreciate it. There are probably more people laughing because Rick turned himself into a pickle than because he turned himself into a pickle to avoid going to family therapy, but that’s why the show works.

The Rick and Morty Fans meme seems to have struck quite a chord on Reddit. The r/dankmemes community has nominated it for September’s “meme of the month,” and with voting still in progress, it looks like a strong contender.