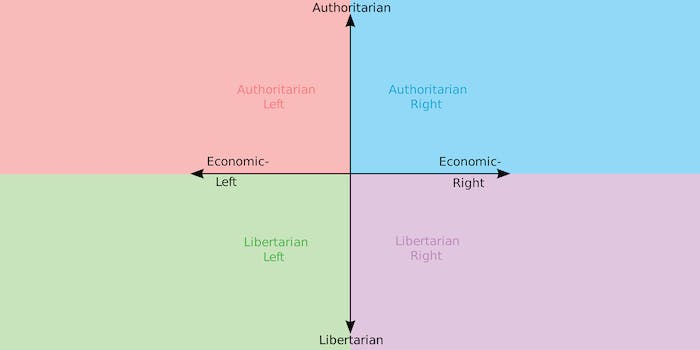 Where do you stand on these new political compass memes?

The standard 2-by-2 political compass, which sorts people along the axes of left-right and libertarian-authoritarian, has long been a vehicle for jokes and memes. It’s so simplistic that it’s more funny than useful, and that makes it a perfect tool for stereotyping the true believers of various political philosophies. The political compass meme has been around for years, but it made a big comeback in April, thanks in part to this very good tweet:

It somehow manages to call out each of the four quadrants in a way that makes even those who identify with them nod in agreement. These memes are about stereotypes, sure, but they’re funny because they’re broadly true.

Here’s another one that went viral this month:

No questions or comments please pic.twitter.com/wxAbtYWKwe

It’s great, because you know every one of these people—or, at least, you’ve seen them all online.

With its four wide-open quadrants to fill, the political compass also lends itself to mashups with other memes. Here’s a recent one featuring the Tim and Eric Free Real Estate meme:

In the past, it’s also been combined with the notorious loss.jpg webcomic:

Wait a minute… is loss a political compass?
Top Left: One alone b/c nothing outside the State
Top Right: One taller than the other signifying hierarchy
Bottom Left: Both equal height signifying equality
Bottom Right: One upright, one down, signifying oppression of the workers

These memes can also get very weird, full of absurdist humor and references that only Extremely Online people will get:

the only political compass pic.twitter.com/8b2iVa4q5Y

Political compass memes can be viewed as a subset of alignment chart memes. The alignment chart started as a way of classifying characters’ morality in Dungeons and Dragons, but internet culture has produced its own humorous mutations that chart everything from cartoon characters to what is and isn’t a sandwich.

But political compass memes are often a lot more pointed and more aggressive than alignment chart memes as a whole—they’re funny, sure, but they typically have a message or a real political perspective behind them. They’re part and parcel of the way memes are evolving as a medium for political communication. In that sense, maybe other alignment charts aren’t the most fitting comparison, and we should look at where the compass memes fit in with other meme formats for politically speech.

On that spectrum, they’re more sophisticated than a Trump-themed Photoshop of Pepe the Frog standing at the imaginary U.S.-Mexico border wall with a semi-automatic gun, but less sophisticated than the criticisms offered in a typical Galaxy Brain meme. And the compasses are far, far more primitive than the dialectical, conversational arguments that take place in the new and good American Chopper meme.

As @HarryGiles points out in his “Dialectical Theory of Memes” graphic, the political compass meme is limited because every person or element is stuck in a static position on the compass. There’s no growth or change within the meme, no sense of progression or conversation. The other, more recent memes on his chart are better suited for political speech—Galaxy Brain always implies a progression of ideas, and the American Chopper guys always have a back-and-forth exchange.

That doesn’t mean there’s no value in the political compass, though. If you want to equate libertarians with a Shiba Inu in a fedora, it’s the right tool for the job.