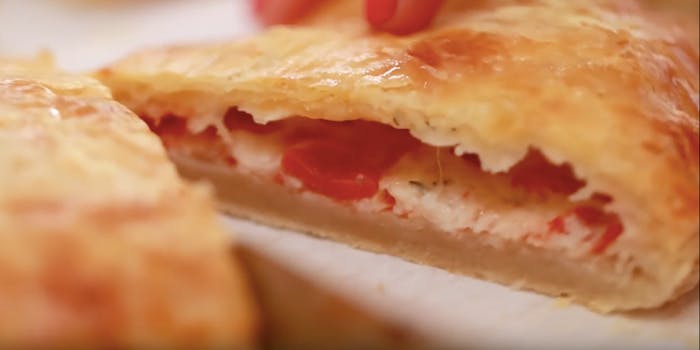 How the internet decided that every food is ravioli now

Several years ago, there was a heated social media debate about whether a hot dog is a sandwich. Most said “no,” but once a mind is stretched to a new idea of what a sandwich can be, it can never return to its original form. People started to point out other things that could, with some creative thinking, be classified as sandwiches: burritos, ice cream tacos, even pizza. In 2018, the sandwich debate is old hat, but it’s given birth to an even more iconoclastic debate over food taxonomy: What is ravioli?

The discussion of ravioli’s true essence kicked off in July 2017 with this tweet from Ellen McGrody, who argued that Pop-Tarts, the toaster pastries with a sweet filling, are ravioli:

the sandwich discourse is played out. we need to have a new discussion.

pop tarts are a kind of ravioli.

If a sandwich is just some foods between some other food, as the internet has postmodernly posited, can’t ravioli be any type of grain-based shell with any type of filling? Sure!

Some even argued that Tide Pods, which are not safe to eat and are only a food in the world of internet jokes, are ravioli. Mamma mia! Where does it stop?

At the time, McGrody expressed some consternation that her Pop-Tart joke just wouldn’t die.

I did this. Why does this post continue to return and haunt me. https://t.co/jWf3H7PQ0b

Pop-Tarts even weighed in on the debate earlier this month on Twitter. The company (or social media manager for the company) apparently doesn’t believe that Pop-Tarts are ravioli.

Have a nice day

But the ravioli hypothesis is here to stay, and it has led to even wilder food-naming theories, including the “Cheerios are penne” conjecture:

if pop tarts are ravioli, then cheerios, topologically, are penne.

The ravioli classification debate may be just one facet of a larger internet obsession with stuffed pasta. YouTube icon Filthy Frank hit it big in 2015 with a video where he walked around eating ravioli from his pocket and singing about it:

His song was likely inspired by an even earlier SpongeBob SquarePants bit that became a meme of its own: “Ravioli, ravioli, give me the formu-oli.“

One person on Twitter declared that the “ultimate and final ravioli” is a coffin.

coffins : the ultimate and final ravioli

It’s a dark joke—but is it wrong?