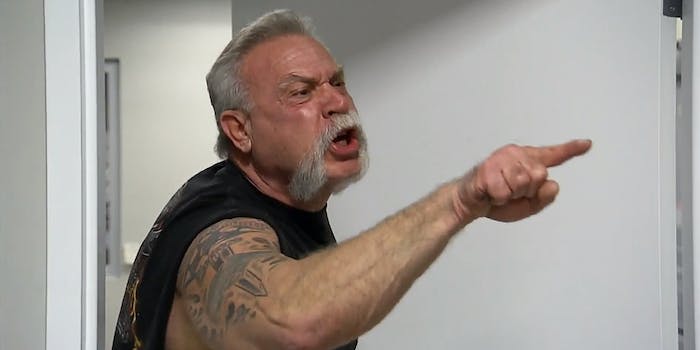 How ‘American Chopper’ is changing meme culture for the better

Every era gets the memes it deserves. In 2018, there’s no meme that fits contemporary internet culture more perfectly than American Chopper. The meme reimagines an argument between reality TV motorcycle guys Paul Teutul Sr. and Paul Teutel Jr., and the results are by turns combative, supportive, and educational, which sounds a lot like being on the internet these days.

The original 2009 TV clip that inspired the meme showed the most intense father-son argument in American Chopper‘s history. There was yelling, there was chair throwing, and Senior fired Junior at the end. Their working relationship was never the same; Junior went on to found Paul Jr. Designs and compete head-to-head with his dad’s Orange County Choppers. Their rivalry was televised in the spinoff series Senior vs. Junior.

From the beginning, though, the American Chopper meme was much less acrimonious than the real argument—in fact, it was downright supportive. Here’s the pic that started it all, way back in 2012:

In the years to come, memes that subvert expectations by using kindness and empathy would become common enough to get their own label: wholesome memes. And, in a social media environment dominated by bitterness and animosity, they’ve become extremely popular.

When the American Chopper meme made its comeback in 2018, it maintained some of the wholesomeness of this original comic. See, for example, the one where Senior argues that all women are queens and ‘the girl reading this‘ is beautiful:

Or this one about artists mutually supporting one another:

The essential character of the meme, as this poster argues, is empathy:

But American Chopper isn’t just wholesome; it’s also taking memes in a new direction for 2018. Meme posters have truly mastered the medium when it comes to expressing emotions and simplified political opinions, as well as sharing relatable experiences like school stress, crippling debt, and depression. Chopper points to something else they can do—they can educate.

With all those text boxes, there’s a lot of room to flesh out genuine academic or critical debates. You can deliver a fairly rich analysis of a film or summarize two competing schools of thought, all in one too-tall image file.

Here’s a debate about the state of marketing as it relates to social media and privacy:

Here’s an argument about the limits of scientific knowledge:

And one about the implications of atheism:

And one about one of the most important movements in American literature:

These practical and philosophical issues are now getting a full airing in front of a huge audience, all because they’ve been packaged into the medium most suitable for mass consumption in 2018. It’s important to remember that the largest, most productive segment of meme makers are still in school, whether that’s high school or university. That means the American Chopper meme isn’t just top-down edutainment; it’s an ongoing conversation between smart people who now have a cool, popular forum to share what they know. It’s a space to express two sides, demonstrating empathy for opposing positions.

It’s quickly becoming clear that this is no ordinary meme. As blogger Venkatesh Rao tweeted, it’s a break with the cynicism that has weighed on meme culture for the past two years, ever since the 2016 election cycle began.

The American chopper meme is the opposite pole from harambe. Instead of perfectly distilled nihilism it’s like the Wikipedia of memes. Packed with sincere good information and vitamins.

Rao cites Harambe, the defining meme of 2016, as an example of meme culture’s nihilistic tendencies, and he’s right. Between the Trump campaign, Brexit, North Korean missile tests, and everything else that signaled reality as we knew it was over, the dominant stance in meme culture was one of irony. The rallying cries of the Extremely Online were “lol, nothing matters” and “this is insanely good, actually.” And the purest expression of that irony was thousands of people mourning a murdered zoo gorilla and turning him into an internet deity.

In 2017, a “new normal” set in, and online culture tentatively started experiencing our new, Trumpian world without a layer of self-protective irony. The most important meme of this period was the Galaxy Brain, a scale which paired pictures of increasingly large, increasingly glowing brains with increasingly stupid ideas. Galaxy Brain saw and criticized the world as it was: full of fiercely partisan political, economic and media actors so convinced of their own brilliance that they couldn’t tell the difference between a good idea and a plainly idiotic one.

Galaxy Brain trafficked in cynicism, if not outright irony, but it also laid the groundwork for the more earnest American Chopper meme.

Some have dismissed Chopper as just another form of Galaxy Brain, maybe even a less sophisticated one. That ignores a meaningful difference between the two: Galaxy Brain is a unilateral assessment of a position as bad or dumb, but Chopper is a dialogue that doesn’t have to end with a value judgment.

American Chopper is a great meme format because it's polyphonous. The author embeds a maximal interpretation of two antagonistic voices without attempting to resolve the conflict. Compare to the dialectical galaxy-brain which always seeks synthesis. https://t.co/l8NYuORPVs

And that’s what makes it a step forward for memes as a medium. Instead of giving us the power to curl up inside a shell of ironic detachment or dunk on our ideological opposites, the Chopper meme lets us talk to each other, and we’re using it to both teach and learn about a topic. It’s something memes have always had the potential to do, as a democratic medium rather than a corporatized megaphone, but it’s rare to see a meme actually embody that ideal. Just a few short months ago, we were still eating Tide Pods. Look at us now!