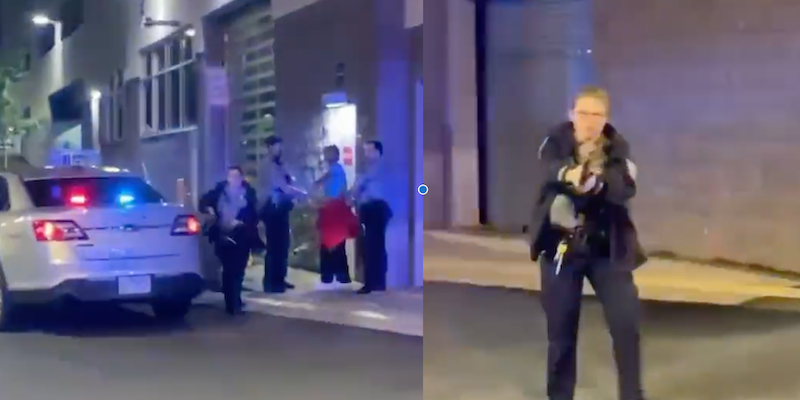 Cops claim they suspected the person was armed.

A viral video shows police officers pointing guns at a person filming them while they detain someone. Cops claim they thought the person was armed. They weren’t.

In the video, the person filming with what appears to be a cell phone approached a building where police appear to be detaining someone. The officers are with the Fairfax County Police Department (FCPD) in Virginia.

“Yo, what the fuck,” the person filming said as they approached.

Noticing them filming, an officer said to another, “Hey, stop him.”

One of the officers headed towards them, gun drawn.

“Because you have a weapon,” the officer replied.

“No weapon, no weapon,” the person said.

“Get on your knees,” the officer responded.

The video was originally posted on the Bad_Cop_No_Donut subreddit. The redditor who posted it, Wumbo_dmv, captioned the video, “Fairfax Police department pointing their guns and threatening to kill me for recording their arrest last night.”

The sheer number of videos of police killing and assaulting people in recent years has undermined public trust in law enforcement. Accordingly, people were disgusted, though not entirely surprised, by the police’s conduct in this video.

“She literally said, ‘You have a weapon,’” wrote one. “She yelled it so if she fired and was taken to court she automatically has a ‘see I thought he had one’ card.”

FCPD told Patch that the officers in the video were called to an IHOP in Falls Church, Virginia on Saturday night over a report that a group of juveniles had threatened a hostess there with a gun before being asked to leave. FCPD said that the group returned and tried to lure the hostess outside, Patch reports, then the police arrived and detained two of them.

According to FCPD, the police thought that the person who filmed them was a member of the group, so they detained them.

“Due to the nature of the call and not locating a weapon, officers ordered the subject to the ground at gunpoint. Officers determined the juvenile was holding a cell phone and filming,” the incident report states, per Patch.

The officers didn’t find any weapons on the juveniles. They were reportedly released to their parents’ custody.

Twitter user @Ancommiey reposted the video on Monday morning. By Monday afternoon it’d been viewed over 350,000 times on Twitter. Another 85,000 have watched it on Streamable.

“I’m convinced that police need to take a basic criminal and constitutional legal course in order to be a cop,” one commented on Twitter.

Jeff McKay, chairman of the Fairfax County Board of Supervisors, assured someone who tagged him in the comments that there would be “a thorough investigation,” the results of which will be made public.

“The pointing of a firearm prompts an internal review that will be monitored by the Independent Police Auditor who reports directly to the board,” McKay tweeted.

“Ensuring our officers are following departmental policies and the expectations of our community are of paramount importance.”