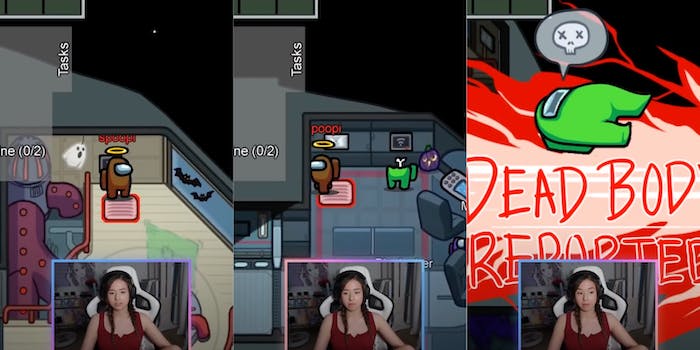 Pokimane pulled off the wildest ‘Among Us’ vent kill

'That was probably one of the best first kills I’ve ever gotten, actually ever.'

The game, a murder-mystery in space about deciphering crewmembers and murderous imposters, has gotten so popular that the Among Us bug has even bitten Rep. Alexandria Ocasio-Cortez (D-N.Y.).

At first, players fumbled around the maps, figuring out the angles and tricks of the trade within the game. Now, players like popular streamer Pokimane, have become skilled enough to take advantage of the various avenues of chaos.

In a new viral video, the game had just started, and Pokimane learned she was the imposter for the second game in a row. The other imposter hit the lights and rushed crewmates into darkness; the streamer jumped into a vent.

She popped out in navigation, with about four other people standing nearby. After the light sabotage, Pokimane knocked off a nearby crewmate quickly and popped right back into the vent.

The dead body was instantly reported. But after the discussion on the possible perpetrator, amazingly, she wasn’t implicated.

Pleased with the kill, she claimed “that was probably one of the best first kills I’ve ever gotten, actually ever.”