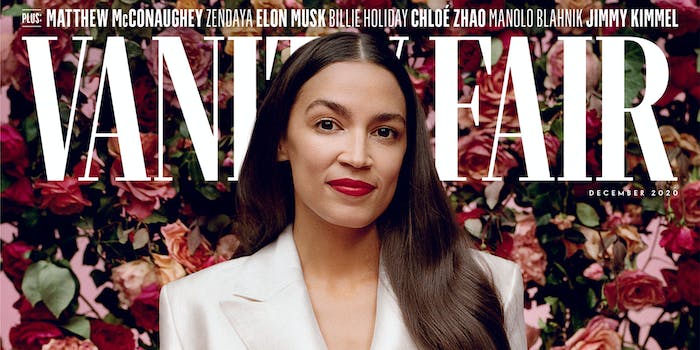 It's the latest attempt to take down the congresswoman for her fashion.

On Tuesday, Vanity Fair unveiled the cover for its December 2020 issue with an accompanying profile of Congresswoman Alexandria Ocasio-Cortez (D-N.Y.). It’s a fascinating piece that delves into the congresswoman’s meteoric rise over the course of her first term as well as the larger progressive movement she and fellow lawmakers Ilhan Omar (D-Minn.), Ayanna Pressley (D-Mass.), and Rashida Tlaib (D-Mich.) are spearheading in Congress.

But for some of Ocasio-Cortez’s critics, the cover story is yet another excuse to use her fashion choices as a gotcha moment to point out what they see as hypocrisy.

Outlets like Fox News and the New York Post zoomed in on the fact that Ocasio-Cortez was wearing $14,000 in clothes on Vanity Fair’s cover while attacking Donald Trump; Fox News’ headline specifically mentions that Ocasio-Cortez wears the expensive outfits “to curse Trump out.”

Others see the outfits as a way to brand Ocasio-Cortez, who identifies as a Democratic socialist, as a hypocrite. Many of those critics are under the impression that Ocasio-Cortez actually owns the outfits that she wears, so by pointing out the price tag, they’re trying to paint Ocasio-Cortez as someone who highlights inequalities while embracing some of the more outlandish tendencies of capitalism that she supposedly speaks out against.

Of course, that is not how any of this works; celebrities don’t just wear their own clothing in cover shoots. In most cases, the people who appear on the covers of high-end magazines like Vanity Fair wear designer outfits that are loaned out to either the magazine or the celebrity on the cover; for the most part, the clothes are returned after the photoshoot ends. By lending out those clothes, designer brands are able to advertise on the pages of magazines to the clientele who can actually afford those brands, albeit in a more overt way than a full-page ad featuring posed models or celebrities would convey. For magazines and designer brands, it’s usually a win-win.

Cover stars wearing their own clothes happens much less often, but it does happen. In those cases, like Teen Vogue’s recent cover story featuring Omar and her daughter Isra Hirsi, the magazine will mention when the photograph’s subject owns the clothing they’re wearing.

“GOP, get yourselves together,” Ocasio-Cortez said in a tweet in response to the criticism about her magazine shoot. “It’s sad.”

The critics who are ripping Ocasio-Cortez apart for her outfit choices on the pages of Vanity Fair and calling her a hypocrite because she’s wearing designer brand clothing are likely either ignorant about how magazine photoshoots work—or worse, they know how it works and they simply don’t care and want to enrage their followers into getting angry or attacking Ocasio-Cortez for yet another reason.

And while they might mention that Ocasio-Cortez should wear more affordable clothing, what goes unmentioned is the Catch-22 that Ocasio-Cortez, as not only a public-facing female congresswoman but also a woman of color in the public eye faces. If she dresses in designer wear, she’s called a capitalist hypocrite, but if she wears something more affordable, she’ll be criticized for dressing down or looking shabby; she could hand-make every inch of clothing and conservatives would still find something to criticize about it.

Conservatives attacking Ocasio-Cortez for how she presents herself is nothing new. When she appeared on The View earlier this year, the New York Post called her out for wearing a “luxe designer dress” on the show. Ocasio-Cortez, who has been open about her use of Rent the Runway to help fuel her Congress wardrobe, affirmed that she rents, borrows, and thrifts her clothes and responded by noting that “The Post is just mad that you can look good fighting for working families.” She’s also been called out for getting an expensive haircut in Washington, D.C., a city where the cost of services is much higher than much of the country (something that critics conveniently forget to mention).

Vanity Fair’s cover story even points out the recurring criticism Ocasio-Cortez gets for her wardrobe choices as well as the politics of her fashion. Like many parts of Congress Ocasio-Cortez has been open about what it takes to dress the part of a congresswoman, noting that “It continues to take me so long to try to figure out how to look put-together without having a huge designer closet.” But, as Pressley pointed out in the profile, the clothes and makeup are a great signifier of when someone is about to do something big on the floor of Congress, such as the day that Ocasio-Cortez called out Rep. Ted Yoho (R-Fl.) for his non-apology after he called her a “fucking bitch” on the steps of the U.S. Capitol and how men use their wives and daughters as shields against accusations of sexism.

“‘You know how I know you showed up to do business? Because you matched your lip with your suit,’” Ocasio-Cortez told Vanity Fair about Pressley’s conversation with her. “[Ayanna] was like, ‘That’s when I knew she didn’t come to play.’”

You can read the full cover story at Vanity Fair.