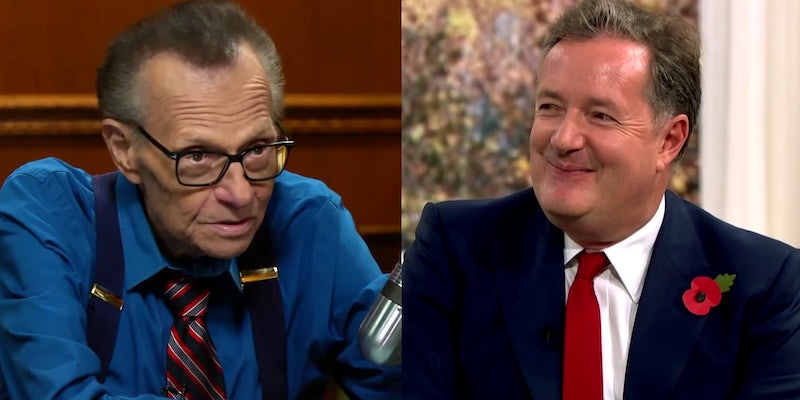 'It's okay to have thoughts you don't express.'

The world is mourning the loss of Larry King after a statement on his official Facebook page confirmed his death at the age of 87 on Saturday.

“With profound sadness, Ora Media announces the death of our co-founder, host and friend Larry King, who passed away this morning at age 87 at Cedars-Sinai Medical Center in Los Angeles,” it read, immediately prompting an outpouring of condolences and fond memories of the iconic CNN host’s life and career.

But one post from the forever controversial Piers Morgan has left fans of King feeling frustrated and dismayed.

“Larry King was a hero of mine until we fell out after I replaced him at CNN & he said my show was ‘like watching your mother-in-law go over a cliff in a new Bentley,’” Morgan wrote on Twitter.

He added in a jab that King “married 8 times [and so was] a mother-in-law expert” while also conceding that he “was a brilliant broadcaster & masterful TV interviewer.”

A number of King’s peers and fans have been sharing their own personal memories of the longtime host in the wake of his death, but coming at it from the angle of having a personal grudge is an out-of-the-ordinary approach—and one that hasn’t been sitting well with many.

Writer Wajahat Ali suggested Morgan “wait a day or two” after King’s death before taking jabs at him, adding that “the biggest insult to Larry King was you taking over his iconic show and being terrible at it.”

“Also, stop being this petty,” he said.

Others clearly shared in the sentiment.

Morgan doubled down and amplified the controversy, as he tends to do, amplifying the voices of those who found his “tribute” amusing and arguing with those who didn’t.

“Larry loved that mother-in-law joke, and he would have found the hysterical reaction to my tribute ridiculous,” he claimed.

He also reiterated that he believes King was “one of the all-time TV greats.”

At the end of the day, Piers Morgan is always going to Piers Morgan, so his irreverent comments on the day of King’s death should come as no surprise. But all the same, this “correction” of his tweet feels pretty on point: