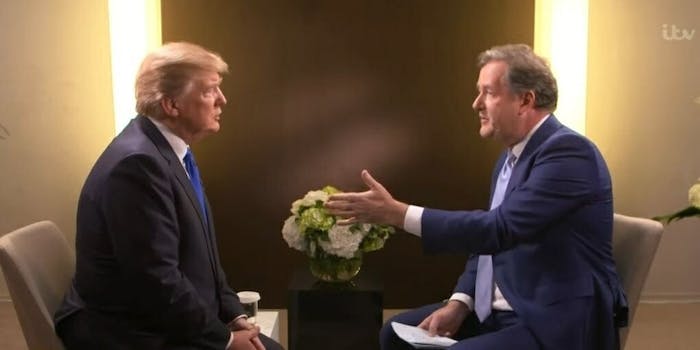 Morgan is in a compromising position.

If you looked at Piers Morgan’s Twitter account on Saturday morning, you’d likely see one image that totally dominates his timeline. And why not? It’s the controversial British talk show host in close proximity to President Donald Trump.

ICYMI: The interview the world's now spent 8 days talking about can be viewed on ITV Hub.https://t.co/BdCpcjWVog#TrumpMorgan pic.twitter.com/Z1Mu7C9guO

The BBC thinks this is OK to broadcast. But if it depicted high profile women, there would be outrage.
Why the double standard? pic.twitter.com/xcdxpEJD3E

That’s one time. And Morgan went back for a second helping.

If the BBC broadcast an image like this after a female journalist interviewed @theresa_may – all hell would break loose & people would be fired. Gender equality shouldn't just apply to pay – should it? pic.twitter.com/9xNqGPjZl9

So we can't have #gridgirls or #walkongirls because the imagery is 'demeaning'.
But the publicly-funded BBC can broadcast this about 2 men?
Any comment, @Ofcom? pic.twitter.com/ErOtK8Lvh6

For good measure, Morgan kept at it on Saturday.

If Trump tweeted an image like this depicting Hillary Clinton & a female interviewer, all those currently celebrating/retweeting it would erupt with outraged cries of 'Sexist!' 'Misogynist!' 'Homophobic!' – led by the BBC.
Liberal hypocrisy in all its unedifying glory! pic.twitter.com/ejd71nqqJP

Since then, Morgan has repeatedly retweeted the photo that shows him nuzzling up close to Trump.

And you just did too. But would you have done if it depicted women? https://t.co/v5tXJxkTF6

And oh boy, Twitter couldn’t get enough of Morgan’s brown-nosing.

Piers Morgan posting an image of him eating the president’s ass is the perfect example of how this often bad website can be very, very good https://t.co/SYKfRH9vqO

If @piersmorgan hadn’t tweeted his indignation, millions of Americans would have missed the source of his ire…and a genuine belly laugh. Thanks, mate! https://t.co/mcie0e6mkv

Does Piers Morgan realise that the more he tweets the picture of him crawling up inside Donald Trump, the more Google will notice? I'm just saying that eventually if you google image search 'Piers Morgan' that picture will probably start appearing near the top…

Piers Morgan complaining about his depiction on the BBC, yesterday. pic.twitter.com/r29X3JZncs

publicist: just stop tweeting the image of u eating donald trump's ass, this will go away on its own in a day

piers morgan: i'll post it one more time just to be safe

The image stems from this bit with British comedian Rachel Parris, who takes Morgan to task for his recent interview with Trump. Clearly, Parris didn’t appreciate Morgan’s softball interview and used that to blast him on The Mash Report, a satirical news show that airs on BBC2.

Morgan keeps tweeting that he’s not “remotely upset” by the image and that it’s the gender equality issues he wants to discuss. He also admitted that he’s not dissatisfied that his name is in the news.

But in Morgan’s mind, he has another good reason to keep posting the image of him eating Trump’s ass. He actually wants to bring awareness to it.

No, I want everyone to retweet it. That’s why I keep posting it. https://t.co/q3mlTwJ4Fo