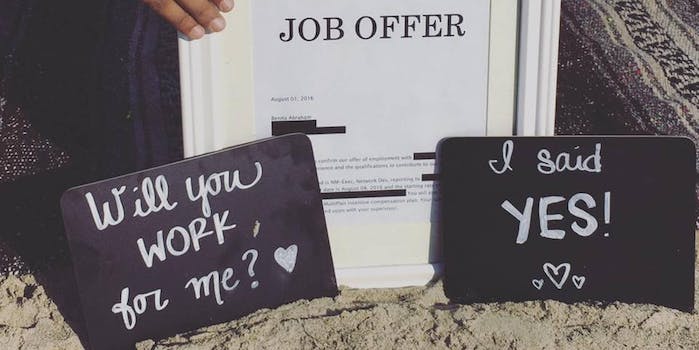 Woman celebrates the romance of employment with job offer photoshoot

After seven long months of waiting, 37-year-old Benita Abraham announced that she said yes—to the job offer of her dreams. Abraham staged an unforgettable photoshoot depicting all the romantic steps between being on the job market and full employment.

Her photos follow in a proud tradition of lampooning engagement, pregnancy, and baby photoshoots. From swapping a burrito for an infant to sending your graduate thesis out into the wild, these image sets speak to the real romance and meaning of our fleeting existence.

Abraham’s shots, which were taken by Liju Mathew, also turn the frustrations of awaiting your dream job into a net positive. Markers like multiple phone interviews follow the quaint-first-date-through-big-proposal format. Even the efficiency of carpooling looks downright fun, with Abraham and a friend clutching keys and smiling.

It’s been three days since Abraham started her new gig. She tells ABC that her first day (a half day) was an incredibly educational experience. To many more such days, Abraham! Mazel tov.