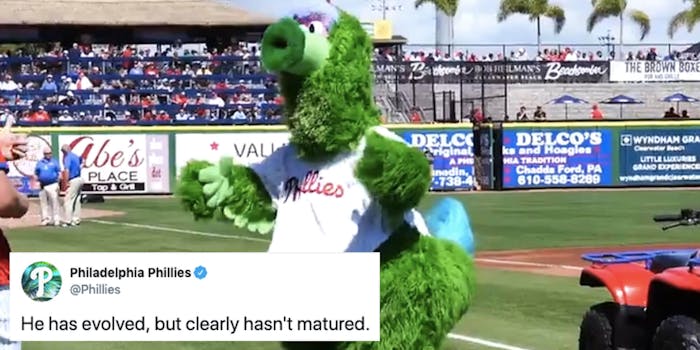 Fans were assured that while he has evolved, he has definitely not matured.

Less than two years after Gritty came exploding onto the scene to quickly ascend as the most beloved mascot in Philadelphia (and worldwide sensation)—the city’s now-second most perplexing mascot, the Phillie Phanatic, unveiled a fresh, new look over the weekend.

The big reveal came during the Phillies’ first spring training home game in Clearwater, Florida on Sunday, against the Pittsburgh Pirates. (Perhaps the Phanatic’s new mojo gave the team the boost to defeat the Pirates, 4-3. )The Philadelphia Phillies also welcomed the Phanatic’s makeover by tweeting a video that ostensibly proves that while he has evolved, he has not matured.

He has evolved, but clearly hasn't matured. pic.twitter.com/Tmo5jHNQOB

The changes were actually more subtle than what many feared when the update was announced last week, in the midst of an ugly, ongoing legal battle with the Phanatic’s original creators, Bonnie Erickson and Wayde Harrison.

Local radio personality Marc Farzetta noted during Sunday’s game that some of the changes include a lighter shade of green fur, a solid blue tail, and what appears to be scales on the underside of his arms—in addition to the overall slimmer look.

It being Philadelphia and all, home to many less-than-forgiving sports fans, the debut was expectantly met with mixed reviews.

THESE are the Phanatic’s shoes not the stupid bobos they put him in yesterday (also pictured: his real tail) pic.twitter.com/5I9xUa6qxn

new Phanatic is the offbrand knockoff version you win after sinking $50 into skeeball in wildwood https://t.co/ov4gFgrUGN

Phillies: What do you want from us, the franchise you root for?

….okay so we're changing the Phanatic

the Phanatic about to turn out as the walmart version from Its Always Sunny pic.twitter.com/XP8V7qcZ4K

If Phillies fans don't boo the old phanatic back into existence we have to stop booing everyone else. We're being tested, and the nation is watching https://t.co/lA44ZhJZlH

My singular hope is that they come up with a gruesome death backstory for the old Phanatic and it involves Gritty somehow https://t.co/OoRAgQ9SEJ

In 2018, Erickson and Harrison issued a notice of termination to the Phillies, claiming ownership of the mascot should the organization fail to reach a new agreement by June 15, 2020. Federal law permits artists to renegotiate their rights after 35 years. Though, the team argues that a 1984 renegotiation with Harrison/Erickson Inc. gave them permanent rights. The Phillies have also claimed that they contributed by creating the character and personality of the Phanatic, beyond just the physical costume.

Yet, many are firmly siding with Erickson and Harrison in their fight to retain legal rights to their creation.

Reminder that the Phanatic being changed is so the Phillies can avoid compensating someone for their creation. This is a bad organization that just wants to save some money

The #phillies are worth 2 Billion dollars. Here are the two biggest stories involving the ball club.

1. They won’t give one of the best catchers in the game an extra 2 mil. Relationship soured.

2. Losing the Phanatic bc they won’t pay the creator. #philliesfever catch it!

Get this bobo dollar store Phanatic out of my face. It is incredible to me the lengths people will go to to devalue and degrade the importance of creatives. Just pay the people their proportionally small share so you can keep making bank jesus

The organization believes that the minor changes made to the Phillie Phanatic costume will put an end to the legal battle, although that remains to be seen.